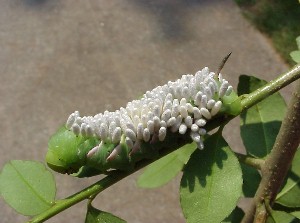 Q: I put what I believe was a tomato hornworm in a jar with plenty of tomato plant foliage to chew on so my 7-year old could witness the transformation to pupa and then into moth. After a couple of days, little white tubes appeared on the worm and he ceased movement. In a few more days, a few fruit-fly sized insects were flying around in the jar. Ever seen this before?

A: Your child is lucky to have you as a father. Instead of smashing the caterpillar you chose to make it an object of learning. Now you and your son get to learn together!

The white tubes on the caterpillar are the cocoons of a tiny braconid wasp. Female wasps inject eggs into the caterpillar’s body. The larvae that hatch from the eggs feed inside the caterpillar until they mature. They eventually eat their way out through the caterpillar’s skin then spin the white cocoons from which adults later emerge. The flying insects you saw in the jar were adult wasps.

Experienced tomato gardeners have learned to leave infested hornworms alone so that a population of wasps is always present to keep the caterpillars under control.