This past spring, a friend gave me three seeds from a giant gourd. He assured me that if I planted the seeds in warm soil I would have gourds like the beachball-sized one he held in his arms. Unfortunately, I dawdled along for weeks and didn’t plant the seed until July. Sure enough, the vines that grew forthwith were huge and loaded with male blooms but nary a gourd was produced until a few weeks ago. I’m sure these puny green globes will perish in the first frost since they need several weeks to form a hard rind. I won’t have any seed to save or to pass along.

My friend saved the original gourd seed simply by waiting until his gourds dried, then shaking the seed from a hole in the bottom. You might have a particularly attractive flower or fruit whose seed you’d like to save for next year. Gardeners have been saving seed for thousands of years, so it can’t be too difficult. First, though, there are some questions to consider:

DO YOU KNOW THE MOM AND POP?

Just because you have a delicious watermelon, that doesn’t mean the melon’s seed will produce tasty fruit. All seeds are formed as a result of pollen coming into contact with the female part of a flower. Tomato flowers are self-fertile. Usually the pollen in a tomato flower comes from its own male part. That means the fruit will usually resemble the parent plant pretty closely. Cucumbers are another story altogether: the pollen always comes from a different flower, borne by an insect. If the honeybee has been visiting nearby squash or pumpkins, the seed you save and plant may give you a cucuash or a cucumpkin. Neither is very tasty. Sweet corn seed are usually produced by controlled pollination from known parents (hybridization). Though the corn on the cob you eat might be as sweet as sugar, the saved seed usually produces a bland and starchy crop next year.

Not all crops nor all flowers are so demanding to reproduce by saved seed. In fact, cross-pollinated flower seed sometimes yield bigger flowers and have more attractive colors that the original parents. The key is understanding the likelihood and outcomes of the pollination method your plant uses.

CAN YOU KEEP THEM COOL AND DRY?

Even though a seed looks dry and lifeless, it is slowly breathing. If you store seed in a warm and humid spot, the breathing will accelerate to a point that the seed won’t have enough energy to sprout next spring. Here’s how to collect and store seed properly:

• Separate seeds from the pulp of fully ripe fruit. Allow them to dry for a week in a shady, cool spot.

• Seeds that are naturally dry, as are most flower seeds, should be separated from the chaff and dried petals.

• Place the dry seed in a small envelope, roll it up and secure with a rubber band. Label each “seed log” you create.

• Place several of the rolled seed packets into a pint jar.

• Pour three tablespoons of powdered dry milk into the center of a paper towel. Fold the towel a few times to enclose the powdered milk. Secure with a rubber band.

• Drop the packet of powdered milk into the jar of seeds. Seal the jar tightly.

• Place the jar in the back of your refrigerator.

By following these steps, the seed will be kept cool and will be dried completely by the powdered milk. Plant the seeds next spring. You’ll quickly find out if your vegetables and flowers exceed the qualities of their parents. 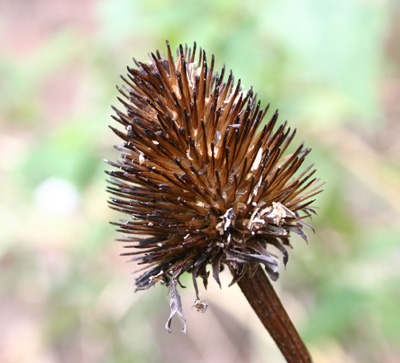