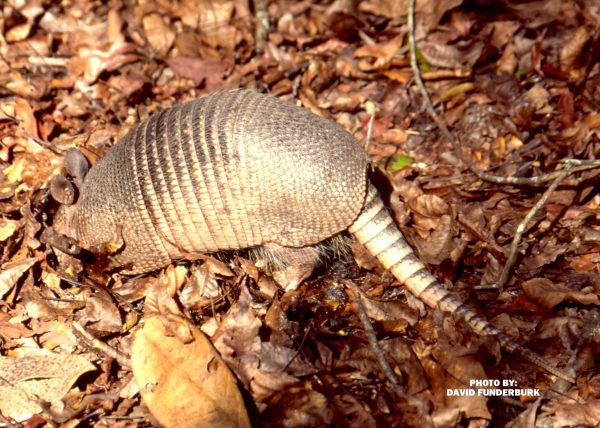 Some people think armadillos are stupid but they simply have extremely poor eyesight. If they are devastating your rose garden, as they were ours,you will find them to be a formidable adversary. Each night they would root deep trenches through the mulch looking for worms and on occasion would dig 10-inch diameter burrows 3 to 10 ft. long into the beds. We tried every repellent we had ever heard of with no success.

We then tried trapping them, using worms as bait. One night one fell for our trap, but we had not counted on his cunning and strength. He apparently worked his way into a corner of the trap, braced himself, and by arching his back applied so much pressure to the heavy hardware cloth trap that he was able to break the wires and escape. We obtained a stronger trap and tried and tried, but the armadillos were too smart to ever again enter a trap. They would root all around the trap but would never go inside.

Just when I was about to concede that the armadillos were smarter than I was, I had a flash of inspiration that solved the problem completely. I purchased the materials for an electric pet fence. This is similar to the electric fences for horses and cows but it operates on lower amperage so it will jolt, but not kill, dogs and cats.

For posts I used 1/2″ PVC pipe cut into 18″ lengths with half the length going into the ground. I used bare aluminum wire and secured it to the posts by drilling a hole though each PVC pipe and inserting a cotter pin. The wire was run through the head or eye of the cotter pin. I ran the wire 3 inches above the level of the ground and had plans to run a second wire 4 inches above the first if needed. I was having a certain amount of damage by rabbits and assumed they would simply jump over the 3″ high wire.

I put the pet fence transformer in a weatherproof enclosure next to my outside electrical breaker panel and buried an insulated wire from the transformer to the bare aluminum wire fence. The fence around one bed was then connected to the fence around the next bed by another insulated wire buried in the ground. I didn’t want to shock myself, and I was afraid that sooner or later I would forget to turn the power on at night and off in the morning, so I installed a photocell in the power supply to the transformer to perform this function for me. This worked out great. To test the system I would temporally put a piece of black electrical tape over the photocell eye to simulate darkness, then use my voltmeter to check between the fence and the ground. The meter will just show a momentary spike.

From the day I put the pet fence in service all nighttime pest activity in our rose beds ceased. No more armadillo tunneling and no more rabbit chewing. However, the armadillos were still in the neighborhood and made repeated attempts to establish a burrow beneath my next-door neighbor’s air conditioner, which was only a few feet from our rose beds. Then one morning I found about eight or ten feet of the pet fence ripped up and some of the PVC posts pulled completely out of the ground. Apparently an armadillo had put his head beneath the fence and when the wire touched the back of his neck he reared up and tore up the fence.

I repaired the fence but it really wasn’t necessary. The armadillos were intelligent enough that they knew they weren’t welcome in the neighborhood and left. All activity at my neighbors ceased immediately after the torn up fence episode. I waited three or four weeks, then I left the power to the fence turned off at night for another three weeks with no sign of renewed activity. I then took the fence down so I wouldn’t have to step over it. The fence has been down over a year now but the armadillos have never came back into our rose beds. I still have the materials to reinstall the fence if necessary.

The pet fence was not expensive, and it completely cleared up a frustrating, and apparently unsolvable problem. If you are bothered with this lovable pest I hope and truly believe it will work for you as well as it did for us.

Evaluation of Baits for Armadillo Control none worked!