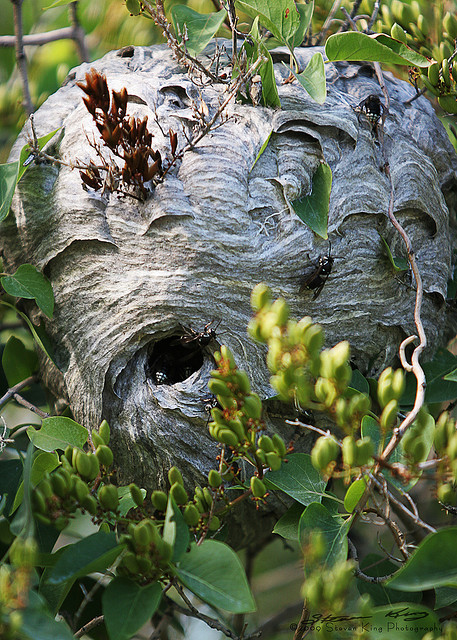 Q: We have a hornet nest in a tree near my house. I want to take it to school for science class. When will the hornets be dead inside the nest?

A: The hornet nest will be safe after a hard freeze has occurred. We describe a hard freeze as being what happens when the night time temperature has remained below 32 degrees for six hours. It gets cold enough to kill the foliage on deciduous plants and to kill exposed insects. Usually we’ve had a hard freeze by late November. Listen to the weather reports to find out. To be completely safe, cut the nest from the tree and put it in a plastic garbage bag. Close it up tightly and bring it indoors for a day or two. If no hornets have hatched, you can be assured they are all dead. If a few hatch, just squirt a tiny bit of roach spray into the bag and close it tight again for a day. That will fumigate anything that might still be living.

Q: One recent weekend I was out hiking with the kids when we came across a massive Hornet’s nest. After watching it for a few minutes we did not see any signs of activity and over the course of the afternoon saw a couple more nests but again, no sign of Hornets. So our question is, where do they go in the winter? Our guesses were – they’re in there but dormant, they’ve gone underground, they’ve died, but left larvae inside to repopulate next spring.

A: Female hornets, who mated with a male before cold weather arrived, bury themselves for winter under piles of leaves or rotten logs. They hibernate there until spring. Everyone else freezes to death. Maybe that is why they get so ornery in fall!