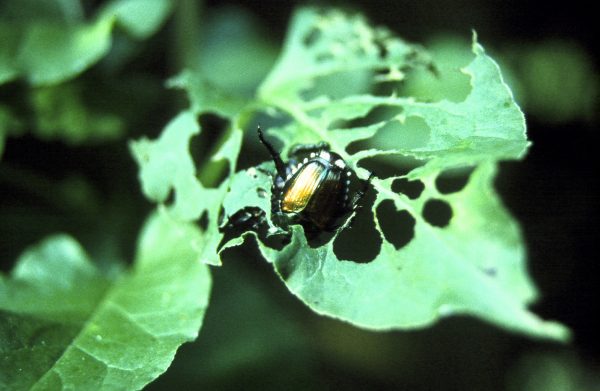 Most summers are favorable for Japanese beetles. The coppery-green beetles hatch in the lawn in June each year. Once they have emerged, the beetles head straight for their favorite plants nearby. The leaves of grapes, canna, loropetalum and flowering cherry look like lace doilies after the beetles have dined on them. The insects burrow into the center of rose and hollyhock blooms and rapidly ruin them.

The Japanese beetle is the adult form of one of the white grubs that you discovered when digging in your lawn or garden earlier this spring. The adult beetles will feed in June and July and then will lay eggs on the ground in your lawn. The eggs turn into grubs, which feed on the roots of lawn grasses until next spring – and the cycle begins again!

. Don’t be surprised if the sprays seem to have no effect. You ARE killing the beetles but even more grubs are hatching to take their place. You might have to spray every few days to control the waves of beetles hatching.

Drenches – A systemic insecticide such as imidacloprid (click for sources)

can be applied 20 days before adults appear. This chemical is not very effective as a contact insecticide. It is not transmitted to flower petals, so rose blooms may suffer while leaves are protected.

Hand Picking- Hand-picking is an option if the problem is not severe. Follow these tips for successful seizure:

1. Place approximately an inch of soapy water in the bottom of a small cup. Better still is a long-handled measuring cup, which can be slipped into position without startling your prey.

2. Begin as early as possible in the morning. Beetles are cold blooded; they move more slowly when they are cool. Notice that beetles show their alarm by raising their hind legs. Stop your movement when you see the legs go up.

3. Without touching the plant, hold the container just under a cluster of beetles. Gently tap the leaf with a twig. The beetles will scramble off the leaf and drop into your cup.

4. If the thrill of the hunt pales for you after a few days, you can bet that children can be hired to do the work for you. At a nickel per bug, a trip to the ice cream store can soon be financed!

Grub Control- The best time of year to control Japanese beetles is in the fall. The eggs and new grubs are very sensitive to pesticides then. Grub control granules (click for sources)

provide excellent control, whether spread in fall or spring.

Be sure to water the lawn before putting out the pesticide: your grubs will move closer to the surface. Irrigate afterwards once again to move the chemical down to the grubs’ earthen lair.

Milky Spore- The white grubs that precede the beetles can be killed by infecting them with milky spore disease. This bacteria is harmless to birds and mammals but lethal to Japanese beetle grubs. For it to be most effective, you must have a moderate population of grubs in the first place. As they die, they release more spores, which infect grubs in succeeding years.

NO Traps- As any parent of a teenager knows too well, hormones are powerful attractants. Scientists have discovered a hormonal lure for male Japanese beetles. They will come from afar to find the mega-mama beetle bombshell whose perfume scents the air. It is quite impressive to find a gallon of beetles in your trap – but remember that an equal number of them didn’t make it to the bogus boudoir and are now munching on your landscape! 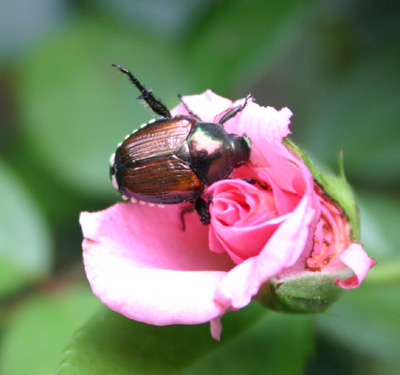 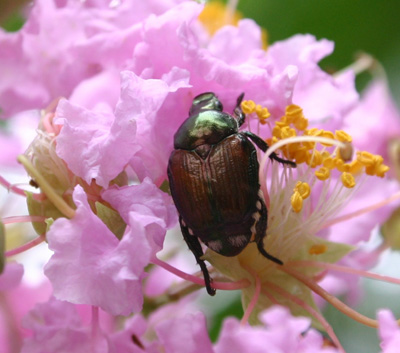