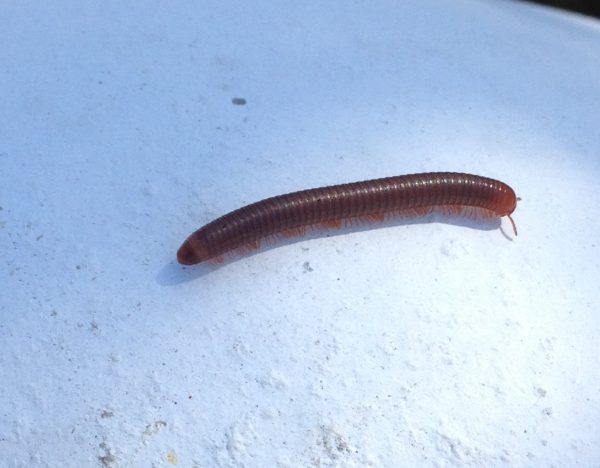 Spring rains often bring creatures which are not seen at other times of the year. The millipede is one of those cyclical pests. Here is a typical question:

Q: Last spring We had hundreds of millipedes scurrying through our house and garage. When I called my pest control company, they said they could not treat for this bug. Is there anything I can do to avoid the problem this spring?

A: Millipedes are one of those bugs which are sometimes a problem and sometimes not – depending on the weather. If March and April are rainy and cloudy, millipedes will have several weeks in which to hatch and then to produce several increasingly larger generations. By May, some folks are sweeping them out by the hundreds. To paraphrase Yogi Berra, “The spring is deja vu all over again.”

What can you do? Reduce the moist areas where their eggs overwinter to reduce their initial population. Rake out all of the mulch under plants near the house and replace it with fresh straw. Mow your liriope down to 3 inches high so the soil underneath can dry out. Move any leaf piles back to a compost area at the rear of your lot. Keep your grass mowed often so the thatch doesn’t become sodden. If all else fails, sprinkle insecticide granules in a 24 inch wide band around your house and along your driveway. There is no need to treat your entire lawn.

Millipedes live in moist areas of mulch and lawn thatch. They often form a mass on sidewalks and come into garages.

Fortunately, they are not harmful – only a nuisance. Use a garden insecticide (click for sources)

and spray a two foot wide strip on all sides of your patio, steps, walkway, etc. Also spray the mulch under shrubs near the house. Dry weather usually causes a precipitous decline in numbers…..unless the mulch areas are constantly damp from irrigation.

S. B. comments: “I have had a millipede problem for about 4 years, every spring/summer for the past 4 they have invaded my space. Just for grins this year I sprinkled a 4 inch wide band of Sevin dust around the entire perimeter of the house. After a couple of days there were thousands of dead millipedes. We still the occassional one but we did have some success fighting the little nuisances.”

In the last couple of weeks, I’ve had a number of readers write about “tiny worms” that have crawled into their homes and when disturbed, roll up in a ball. Some of them have complained that they have found dozens on the floor. The problem is millipedes. And with their cousins, the centipedes, they can occasionally enter our homes in large numbers and become pests.

Centipedes and millipedes are not insects, but are related more closely to shrimp, crayfish and lobsters. Both have long segmented bodies with distinct heads. Centipedes are yellowish to brownish, flattened top to bottom, with a pair of long antennae.

Millipedes are often brown to blackish, more rounded, with a pair of short antennae. Neither of these creatures carries serious diseases nor do they damage food or other belongings in the home.

Centipedes have a pair of poison claws behind the head (these look like mouthparts) and use them to paralyze small insects, spiders and other small animals on which they feed. In this area, they vary from 1 to 3 inches long.

Outside, centipedes occupy a variety of habitats but prefer dark, moist sites beneath stones, woodpiles, leaves and bark. An exception is the “house centipede,” which can adapt well to the inside of our homes and lives in basements, damp closets and bathrooms. This species is grayish-yellow, with three long stripes on its back. It has 15 pairs of very long legs, and in the female, the last pair is more than twice the body length. Though only an inch or so in length, the long legs make it look much larger. It moves very quickly when disturbed, can climb walls easily and is sometimes mistaken for a long-legged spider. This species is usually active at night, when it seeks out roaches and other small insects.

If it is plentiful in your home, a moisture problem is indicated.

Millipedes vary in length from less than an inch to more than 2 inches long. They are scavengers, preferring decaying organic matter like leaves, mulch, piles of wood and other decomposing material. When disturbed, they will sometimes curl up, like pill bugs.

Millipedes also prefer moist environments. Sometimes they migrate in large numbers, especially in the cooler days of fall or after heavy rains. It is during these times that they may invade our homes. Because they crawl on the ground, the basements and first floor are the primary areas of infestation. They climb walls easily and can enter through any small opening. But they usually die from desiccation soon after they come inside.

Millipedes and centipedes occasionally enter our homes and become pests. Some of the larger centipedes can bite, and the result is usually a reaction similar to a mild bee sting. The only danger is with individuals who have a heightened sensitivity to arthropod poisons. Millipedes are not poisonous but can produce an irritating, foul-smelling fluid that may cause allergic reactions in some people. You should always wash your hands after handling a millipede.

> Remove preferred environments outside the home. Eliminate rocks, boards, woodpiles, mulch and similar accumulations from the area around your home.

> Dethatch the lawn and mow closely to promote drier conditions, which repel these pests. Watering in the morning rather than the evening will allow the lawn to dry before these organisms become active at night.

> Exclude them from your home by caulking all cracks and crevices, and make sure all doors and windows fit tightly.

> If millipedes and centipedes occur in large numbers, an insecticide treatment may be in order. Garden insecticide (click for sources)

applied around the foundation, doors and windows will provide temporary control. You may also apply liquid or granular forms of those materials to mulched flower beds and heavily thatched turf. When treating inside, treat cracks and crevices along baseboards and other places where they have been seen in larger numbers.

Jim Howell is a University of Georgia entomologist and an associate of the Georgia Museum of Natural History.