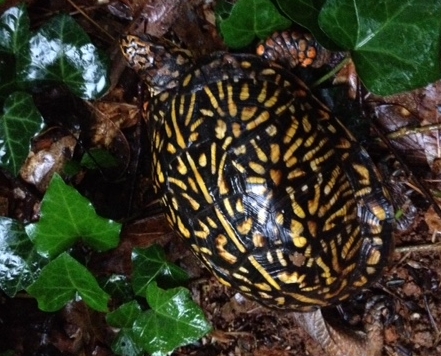 Q: I saw this little guy in my yard in Powder Springs. Do you have any idea what type of turtle it is? It actually looks like it has flowers painted on the shell! It’s not an Eastern box turtle. There is an ornate box turtle, but its range is in TX and LA and the markings don’t exactly match. It really is a neat shell pattern!

A: Jason Clark at Southeastern Reptile Rescue says this is indeed an ornate box turtle. He agrees it is not supposed to be here in the southeast so it’s probably one that someone picked up somewhere out west and released it here.

This turtle will probably survive here but that’s not a good thing because it might be able to interbreed with the box turtles that are native to Georgia. This could cause genetic problems.

If you find it again, call Southeastern Reptile Rescue and they can advise on what can be done next.