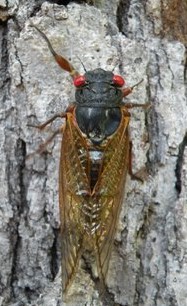 In Spring 2011, billions of 13-year cicadas emerged in Georgia – the first time they had been seen since 1998 (when President Clinton and Monica Lewinsky were in the news). These are members of “The Great Southern Brood,” the only 13-year cicada that occurs in Georgia. Cicadas are harmless to humans and cause only minor damage to trees by laying eggs at the tips of limbs, producing slight twig loss (“nature’s pruning service”). Their daytime singing can be very noisy, but their numbers die out within six weeks.

This seemed like an excellent opportunity to determine what portions of Georgia still have viable periodical cicada populations, so the University of Georgia’s Cooperative Extension entomologists surveyed the state to determine where 13-year cicada populations are found in Georgia. Because this event covers only a six-week period, recruiting boots-on-the-ground was crucial. Using both traditional and social media, UGA Extension Specialists recruited citizen-scientists from all over Georgia to report locations and photograph cicadas.

Historically, the Georgia Museum of Natural History had periodical cicada submissions from 17 counties, from 1907 to 1998. The only publication on periodical cicadas in Georgia (Hunter and Lund’s 1960 paper) indicated that 13-year cicadas had been reported from 14 Georgia counties in the 1959 emergence. No systematic survey had been conducted to determine what counties still had 13-year cicada populations in the 21st century, so we undertook the project.

In March UGA’s College of Agricultural and Environmental Sciences’ Office of Communications and Technology Services prepared a press release. In early April an article was sent to all the county Extension offices through the Extension list-server, and the Center for Urban Agriculture’s Willie Chance distributed an article through their list-server. Anyone spotting a periodical cicada was asked to e-mail a photo to a designated e-mail address, and within days the accounts started pouring in. Walter Reeves, another UGA Extension alumnus, added a “Hey, I found a cicada” hot button on his “Georgia Gardener” website, which allowed people to directly e-mail us.

In total, over 1,000 cicada reports were received. Recognizing that anyone sufficiently motivated to look us up and send an e-mail might also be willing to collect and submit cicada specimens to the Georgia Museum of Natural History, we replied to each with a request and instructions for cicada submissions.

The first 13-year cicada was spotted in mid-April but not reported until the Augusta Chronicle newspaper article appeared a few days later. By the third week of April, reports were coming in by the dozens per day. At its peak, over 50 reports (with accompanying photos) were received each day.

This project demonstrates the integral partnership of Extension and research within the UGA system. All county Extension offices participated by including articles in their newsletters, by providing media interviews, and by responding to queries.

In addition to using traditional media such as newspapers, radio, and television to spread requests for cicada reports, this project employed social media such as Facebook, Twitter, and Flickr. It was expedited by general access to digital cameras, cameras on cell phones, and e-mail. People found it easy to take pictures of cicadas they found and send them to us with minimal effort, which increased the probability they would do so.

All the Georgia metropolitan papers carried at least a couple of articles about the cicadas, typically including an article when cicadas first appeared and another reassuring people that the cicadas would be gone by Memorial Day (after receiving complaints from citizens who thought they would be deafened by the sound).

Georgia Master Gardeners Tweeted cicada sightings and included updates on their Facebook page. All media were accompanied with eye-catching photographs of red-eyed cicadas.

Citizen-scientists were recruited to survey their neighborhoods for cicadas and to submit photographs and location data for inclusion in our distribution map. They were encouraged to involve young people (family members or neighborhood kids) in collecting specimens for the Georgia Natural History Museum. Youngsters were encouraged to plan to attend UGA when they get ready for college and to come by the Museum when they are freshmen to view the cicada specimens they submitted in 2011.

Though this was an intense short-lived phenomenon, lasting only six weeks, it certainly grabbed the public’s attention and sparked their imagination. Hundreds of amateur naturalists were recruited and hundreds of cicada photos were submitted. People who had never had any connection to insects learned that some insects are not only benign but quite fascinating, in fact. Instead of parents cautioning their children to avoid insects, they were encouraging them to get out and collect them and, in the process, learning a lot about insect biology and behavior.

Benefits to the Public: People were educated about periodical cicadas, their novelty, their biology, their behavior and their ecology. Information was made available to the public in a timely manner, just as they needed it. Citizens were challenged to consider the role of land use patterns, urbanization, and habitat loss in population extinction. People were included and involved in conducting research, resulting in a positive experience for hundreds of citizen-scientists.

Benefits to UGA: All the media coverage resulted in very positive exposure for the University and for Cooperative Extension. The story was covered in over a hundred newspapers (including The Huffington Post and The New York Times), dozens of radio programs (at least two on NPR), and a couple of television segments. This work fostered linkages between CAES campuses, divisions, and locations. For Georgia citizens, it provided reinforcement of UGA as the source of unbiased scientific information. The experience fostered networking with groups such as Georgia Outdoors, birders, Audubon Society, and other naturalist groups.

Benefits to Science: This project more than quadrupled (from 17 to 75) the number of Georgia counties known to have 13-year cicada populations. It was determined that in Georgia 13-year cicadas started emerging by mid-April and were generally gone by the end of May. As a result of this study, more than 600 periodical cicada specimens (from 25 counties) were donated to the Georgia Natural History Museum. Future researchers can build upon this knowledge and use these baseline data for future cicada monitoring.

Final Report on Emergence of Periodical Cicadas in GA