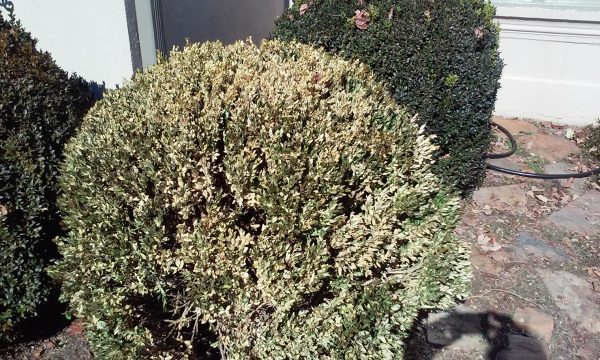 Q: We revamped our landscaping in the fall of 2008. We planted American boxwood on the south side of the house. As you can see, one is sick but the other boxwoods are doing great. A landscape company maintains them. Is this a disease that could spread to the healthy ones?

A: There’s a new boxwood disease that is slowly spreading in GA: boxwood blight. It attacks American and English boxwood but Korean boxwood shows some resistance.

UGA scientists are trying to map the disease’s spread and to do that they need you.

Homeowners can submit suspected disease samples through their local Extension office for $10. Contact your office by calling 800-ASKUGA1 ( 800- 275-8421).

If a homeowner is using a landscape company, then the sample is considered a commercial sample and there is no charge.  The only way to deal with the disease once present is to remove all plants (including roots and fallen leaf litter) and to replant with something other than boxwood, or possibly Korean boxwood,  as long as they don’t still have very susceptible dwarf English boxwood in the same garden. Korean boxwood could be infected, just not show many symptoms, and spread it to the more susceptible English boxwood.

Commercial landscapers are aware of the disease and are looking out for it. Several routinely send in samples when they visit sites. It has been found in several landscapes in the Buckhead area, as well as on plants for sale at a couple of retail nurseries in Atlanta. Hot summer temperatures seem to stop the spread during that time of the year. Once cooler, wetter weather begins in the fall, however, the disease comes back and spreads quickly.

Volutella blight and macrophoma blight also affect boxwoods but it is impossible to distinguish them from boxwood blight by field observations alone.

It is extremely hard to control boxwood blight with fungicides…that’s why it’s important to accurately diagnose your problem quickly.

The disease can also infect pachysandra.