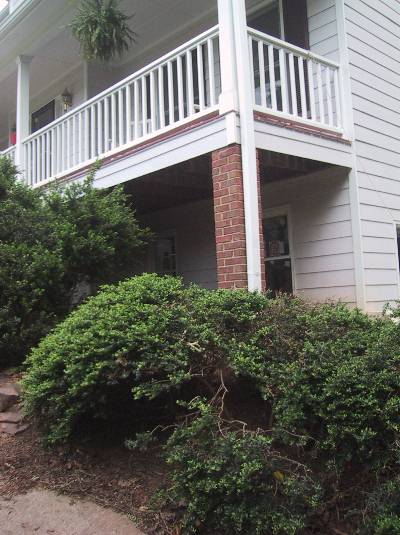 Not able to play on top of the boxwoods, they naturally decided to climb under them. Exciting, but not quite enough room for the three of them. Being resourceful, and knowing I was busy, they took it upon themselves to use my gardening shears to clip the branches that were in their way, but they didn’t pull out the branches.

It took me longer to realize that huge sections of the front of the boxwoods were not quite the same color as the rest. Because they were dying! They pulled away the dead branches and now there are huge holes in this section of my foundation planting.

Will they recover, or should I just use them as chainsaw practice? And do you know anyone who wants to buy three boys? They’re very good at clipping plants and digging holes, so they might be useful to some landscaper.

A: As the parent of a teenage boy who has had many rambunctious friends over the past several years, I can sympathize with your situation.

I’ve filled in big holes where they tried to build a swimming pool, bought truckloads of lumber for the monster “hut” they built (but never occupied) and come home to find my lawn covered with snow white particles after an hour-long Styrofoam fight.

The good news is that the “swimming pool” now has a ‘Lady in Red’ hydrangea growing in it, the “hut” is a good place to store my mower and the lawn finally gave up its last bits of white last summer.

Since the pruning was done to lower limbs, which are shaded by the upper foliage, I don’t know how quickly, if ever, they’ll re-sprout.

I think you need to plant small evergreens in front of the shrubbery to hide the openings. To get the boys to help you, jab a shovel straight down as deeply in the ground as you can. Drop a dollar coin into the resulting slit. Repeat as many times and in as many places as you think would encourage the boys to go treasure hunting.

Just think…their teenage years will be even more fun!