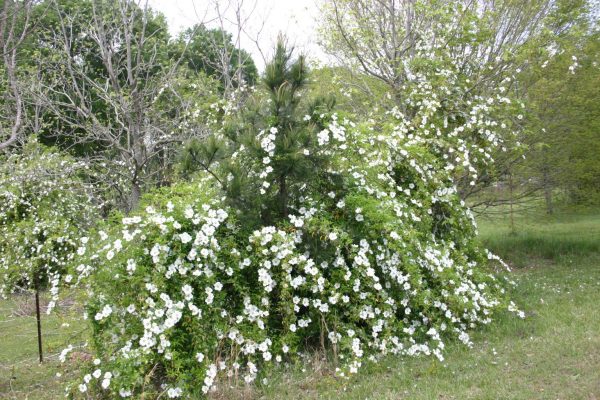 Q: I have to do a garden club program on our state flower, the Cherokee Rose. Do you have any historical information on its original selection and the later naming of a native azalea as Georgia’s flower?

A: The Cherokee rose is not native to Georgia, having naturalized from its original home in China. A good story surrounds its introduction, though.

You’re aware that in 1838, native Cherokee men, women, and children were removed from their land in Georgia and forced to march a thousand miles to Oklahoma. More than 4,000 of the original 17,000 people died along the way. The unjust and tragic relocation was called the “Trail of Tears”. As the legend goes, every time a tear hit the ground, a rose, the “Cherokee Rose”, grew in that place.

In fact, nurseryman Thomas Affleck had previously sold huge numbers of a particular Asian rose (Rosa laevigata) to large homesteads and plantations in the South, recommending the rose as a hedge. Renamed “Cherokee” rose, it naturalized successfully and is now a common sight blooming in the spring.

The Cherokee rose is often confused with Macartney rose (Rosa bracteata) which is similar in form, but is so prolific that its rampant growth places it in the category of pest. Macartney rose flowers in summer, while the Cherokee rose flowers in spring. It is a climber which blooms once a year, bearing large, white flowers, each with three – five petals. It is vigorous, climbing upwards of 20 feet.

In 1979 our esteemed state legislators wanted to honor the native azalea in some way. They named it our official state wildflower while keeping the Cherokee rose as the state flower.