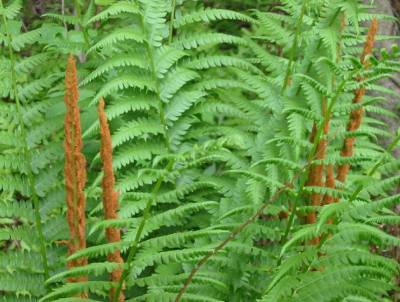 Q: Could you please I.D. this fern? They are growing in a low wetlands area in Gainesville, GA. They are appx. 4′ tall already. Can they be transplanted?

Ferns reproduce from spores that cluster in capsules on the back of fern fronds. On a cinnamon fern the spore capsules are clustered so tightly that the brown frond sticks straight up in the air.

Cinnamon fern is a great one to plant where you have a wet area. They spread readily, transplant easily and the “cinnamon sticks” are always a source of comment and conversation.