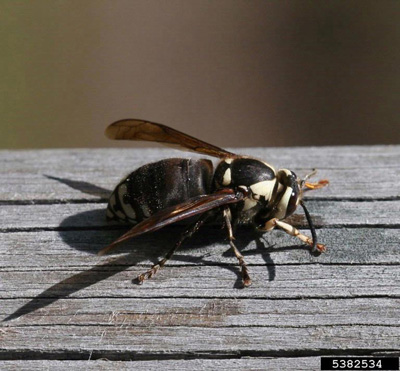 Q: A friend of mine noticed damage to his mountain laurels and rhododendrons. It looks like something is cutting a twist of lemon for a martini on the trunk.

A: I love your cocktail simile! The most likely candidate for making the damage is a European hornet. Both hornets and wasps strip soft bark from healthy plants to use in making their nests. European hornets go so far as to feed on sap released by their chewing. A European hornet resembles a cicada killer wasp but is wider and has more hair on the thorax and abdomen. It nests in hollow trees, as compared to the bald-faced hornet, which builds its paper nests in trees and shrubbery. I have examples of the damage at bit.ly/GAhornetdam.