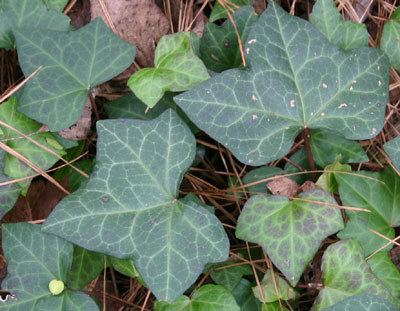 Q: I have heard that English ivy is really Irish ivy and that Irish ivy is the plant that covers my woodland. How can I tell them apart?

A: According to Suzanne Pierot, President of the American Ivy Society:

“Irish ivy, Hedera hibernica, is normally larger than English ivy, Hedera helix, in both its leaves and petioles. The Irish ivy leaf is wider than long, with a broad terminal lobe and the leaves are shiny with greenish, not white veins. Also English ivy has a musty odor, while Irish ivy’s is sweet-ish.

” Although both species have tiny white leaf hairs, their shape is different. In English ivy, the leaf hairs (known as trichomes) are bristly, radiating in every direction whereas those of Irish ivy lie flat on the leaf surface. These leaf hairs can be seen with a little magnifying glass. On the rare occasion when the two species do cross pollinate, the resulting plants are sterile and cannot reproduce by seed.”

In my experience, if an ivy is crawling far and wide over the ground, over and under small shrubs, it is likely Irish ivy and should be controlled by all means practical.

English ivy can also be a vigorous spreader…but most of the stuff we call English ivy is actually Hedera hibernica. Irish ivy out of control