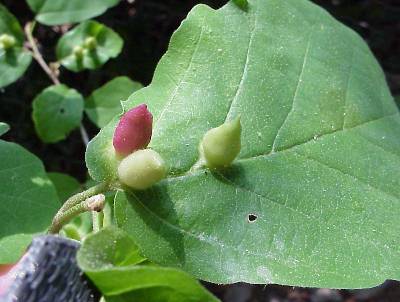 S.N. recently described for me a strange sight: “For the past two springs, we have found small red or reddish-brown mounds attached to our Chinese witchhazel shrub leaves. Could this be associated with lady bugs or praying mantids? If they’re beneficial we need to leave them alone, but we don’t know what they are.”

I knew immediately what S. had seen: witchhazel horn gall. This has been a particularly good year for gall-making insects, according to Nina Eckberg, Cobb County Extension agent. “I’ve had folks bring in wooly ones, ball ones and spiky ones,” she remarked. “The galls and the huge number of aphids and lady beetles have been the biggest source of calls to our office.”

Galls on plant leaves and stems are common at this time of year. The galls are caused by insects, usually aphids, wasps, mites, beetles or midges. They deposit their eggs in the plant tissue, which begins to swell as the larvae hatch. A chemical irritant is released by the female at the time of egg laying or by the developing insects themselves. This chemical causes a gall to form around the eggs and, later, the larvae. Each species of gall insect has its favorite host and forms galls of a characteristic shape. Some are large and woody; others may be hollow, silky or spiny. Galls are common on oak, elm and hickory trees and on rose bushes, goldenrod and witchhazel.

HORN GALL Sam’s witchhazel horn gall is caused by the aphid Hormaphis hamamelidis (what a tongue-twisting name!). In early spring aphid females hatch from over-wintered eggs and crawl onto the leaf buds. As the leaves begin to expand the aphids inject chemicals into the leaf tissue which causes a hollow, cone-shaped gall to form. Aphids live inside the gall, protected from predators and the elements, until they mature. Three generations occur in a season but only the third includes both male and female aphids. In late summer the final generation lays eggs on the branches of the witchhazel plant. The following spring the cycle begins again.

Other types of galls might house immature insects for only a few weeks. As the midge or fly or wasp larvae mature, they escape the gall and go about their imperceptible business. The gall tissue they leave behind is only a plant disfigurement and a curiosity to gardeners. The relationship between the gall-making insects and their host plant is not symbiotic because the plant does not depend on the gall for it’s health. The insects, though, completely depend on the plant to house them for part of their life cycle.

CONTROL NOT NECESSARY The population of gall-forming insects fluctuates widely from year to year. A plant that has few galls this year might be covered with them next year. Once a gall is noticed on a plant, chemical control is ineffectual. Gall forming insects are prey for many other insects, so spraying insecticide only thwarts natural population control. If you notice a gall, take time to carefully break it open and to marvel at this fascinating relationship between plant and insect.