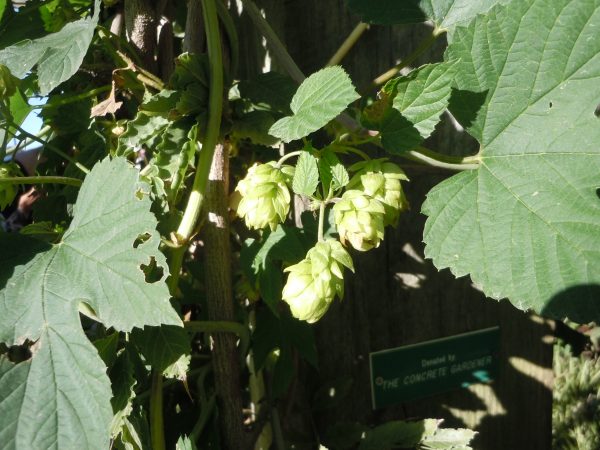 Q: Is it possible to grow hops in Ga.? Could the vine be trained onto a trellis and grown in a pot on a deck?

A: Hops flowers, as most know, are used to flavor beer. There once was thriving industry growing and processing the vines in the northeastern U.S. but epidemics of mildew and mites drove hops farmers to the West coast, where there are hops farms to this day.

The vine grows vigorously from perennial roots. Because it grows so large, I’m doubtful you could keep it happy in a deck container. Frank Henning, Extension agent in Clarke county, reports that hops are growing at the State Botanical Garden and that a craft brewery in Normaltown once grew a couple of vines.

The verdict here is not clear. I’d be indebted to you if you attempted to grow the vine and reported back in a year.

The links below shed more information:

Just wanted to let you know that I have grown them successfully at my home for about 4 years now. I live in Alpharetta, GA, and have them growing in a sunny spot along the house. (Any good vegetable area will work). I have a trellis that goes from the ground to the eaves of the house that they climb on. They will grow to the roof and more, so I have to help them weave back and forth up the trellis so I can pick the hop flowers when they are ready. Diane G.

I planted (2) golden hops vines (Humulus lupulus “Aureus”) last year. Not only did the vines survive the winter beautifully, but they are already 5 feet tall in early April. I also took a cutting last fall and rooted it. It too survived the winter. My vines are very large, vigorous and beautiful. It is difficult to find locally so I ordered online. Lyn C.

I have been growing hops in my front yard, near little 5 pts, to use in beer making for about 10 years.  The biggest (only) problem is thinning them out every year because they grow like weeds.  I grow the variety Cascade, the Willimet variety didn’t survive.  Once they get started they need no care except thinning. I grow mine on a fence so I have to train them to grow laterally, if I don’t they just grow into a twisted dense mass since the fence is only about 4′ high. When trained they reach a length of about eight to ten feet and start to bloom. I then pinch of the ends to encourage secondary shoots and hopefully more “blooms”. They may get a little mildew and sometimes numerours tiny holes in the older leaves but neither event seems to effect the vines or blooms. Japanese bettles are fond of them but easy to control by picking them off. Be prepared for stings when you pick them as there are always a few fierce looking stinging catapillars and numerous tiny grey spiders. The spider webs do enclose small clusters of blooms so that they aren’t pickable. Be prepared for a lengthy time picking hops. It takes 45 to 60 minutes to get hops(5 oz dried weight) for 5 gallons of beer.
John H.

I’m on year 2 with my hops. Love looking at them. These are Cascade. A buddy gave me a 3 year old rhizome last year. Rule of thumb for hops: raised bed or mounded, cool roots and hot leaves.
Kirk B.