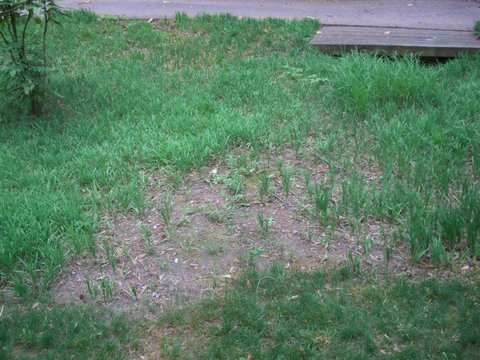 Q: We used to have a full, strong area of Liriope in our front yard. Beginning last year we began to see indications of the growth dying and patches showing up. The grass itself appears to have lost strength and is laying down instead of standing up. The leaves have yellow coloring rather a healthy green appearance.

A: I think you have crown rot, a disease that attacks the base of liriope plants. Seeing the drain cover in one of your photos makes me thing that water occasionally saturates the soil nearby. The soil also becomes mostly water-holding silt.

No fungicides will control the disease. New plant put in the same spot will probably become diseased.

My advice is to replace the liriope with palm-sized rounded river rock. This will be attractive and will allow liriope to grow where it wants and will also prevent erosion.