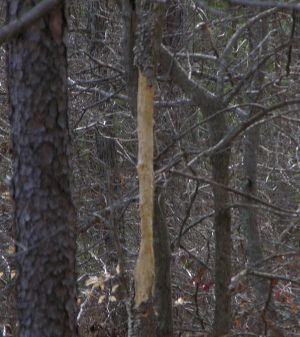 A: Your tree has had some beetle damage in the past. It likely was Southern pine beetle since the damage was so far off the ground. Hundreds of these beetles tunneled under the bark and loosened it. The bark eventually fell off, perhaps after further rot to the trunk occurred.

You can choose to have it taken down if it is close to the house. If it is far enough away to cause no harm, leave it in place as a home for cavity-dwelling birds.