Rose of Sharon – Mentioned in the Bible 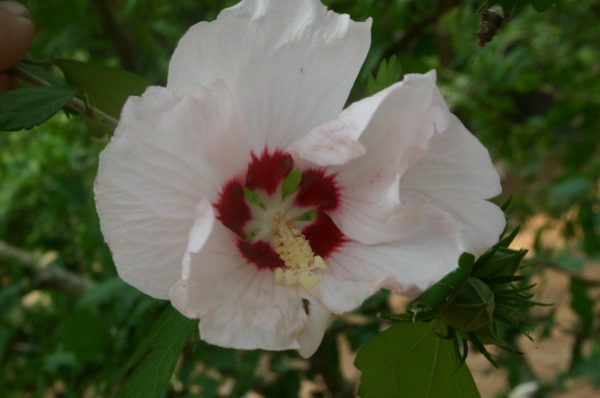 The following came from Consumer Q’s, written by Arty Schronce and published by the Georgia Department of Agriculture

Q: Is the rose of Sharon mentioned in the Bible the same shrub we know by that name? The shrub is also known as althea.

A: The common shrub many know as rose of Sharon (Hibiscus syriacus) is not the same plant mentioned in the first verse of the second chapter of the Song of Solomon (Song of Songs): “I am the rose of Sharon, and the lily of the valleys.”

Biblical scholars do not agree which flower, or even if any particular flower, is the mysterious rose of Sharon although most concur that the original Hebrew refers to a bulbous plant. Among the leading contenders for the title are two species of red tulips, various species of crocuses, sea daffodil (Pancratium maritimum) and the polyanthus narcissus (Narcissus tazetta), a plant familiar to many Georgians at this time of year. Different varieties of polyanthus narcissus are known as paperwhites, paperwhite narcissus or Chinese sacred lily. This narcissus is commonly forced in soil or pebbles for winter blooms and given as gifts at Christmas. It can also be grown outdoors. It is appreciated for its gleaming white or white and yellow flowers and sweet fragrance.

By the way, the “lily of the valleys” referenced in the verse is not the plant we know as lily-of-the-valley (Convallaria majalis). Scholars are still debating what flower the biblical poet had in mind. Possibilities include the hyacinth and Lilium candidum, a plant that later acquired the name “Madonna lily” due to its association with the Virgin Mary in art.

For identification of other plants mentioned in the Bible, see Plants of the Bible and Middle East