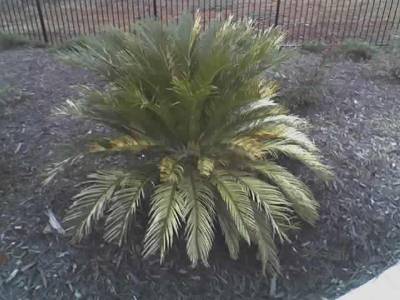 Q: We added a pool to our backyard in late summer. Our landscaper planted five 15 gallon sago palms. He said sago’s can survive Atlanta winters. Now that we have had freezing weather, some are turning brown/yellow. Are they dying?

A: Wow – the damage is pretty serious. Your situation highlights the danger of assuming that global warming means that temperatures will uniformly rise. In fact, while temp’s may average higher in a year or a decade, the swings between high and low temperatures may get worse.

We had a balmy December but early January lows in the ‘teens reminded us that Georgia does have cold weather.

Sago palms are known to survive temperatures as low as 15 degrees F. but their exposure to wind and the length of the cold spell make a huge difference. Temperatures in the low 20’s and high ‘teens cause damage like you see.

Remove all of the damaged fronds and see what happens. If the woody center of the plant didn’t freeze, you might get vigorous new growth in May.

Let me know what happens!