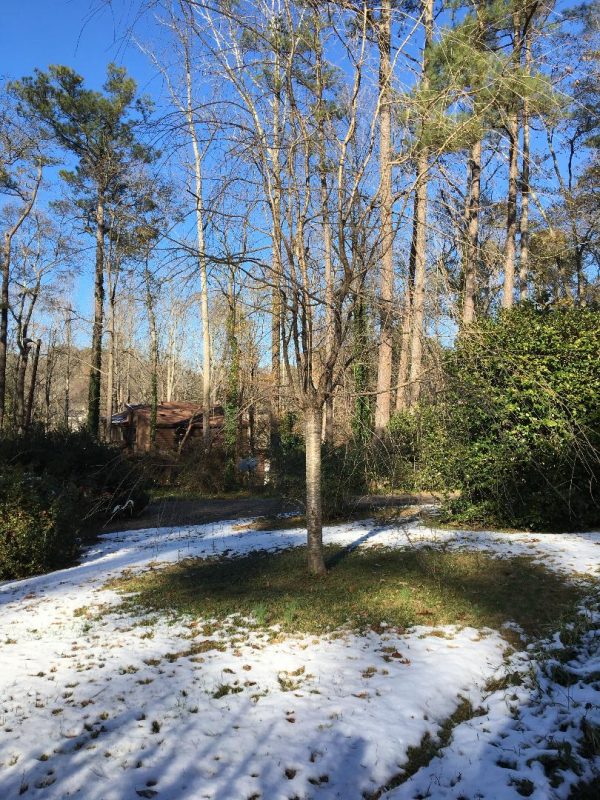 Q: I looked outside today at my snow-covered front lawn where there is a 10-year-old weeping cherry tree, completely without leaves. And without snow in a circle that extended out to the “drip line” of the tree. It makes me wonder if the roots of the tree could be warm. If the tree had leaves, I would know that the leaves prevented the snow from hitting the ground under it, but that is not the case.

A: I have four theories. Three from tree experts and one of my own:

Chris Heim at Davey Tree asks:
I wonder if they applied a topical fertilizer recently under the drip line. The urea would melt the snow. Also, the picture does not show if a larger tree(especially a pine) nearby would cover this area. My large Pines prevented snow cover to half my front lawn.

Art Morris at New Urban Forestry proposes:
The most plausible explanation I can come up with is that despite present appearances at some point there was mulch around the tree and the differing soil texture and/or decomposing organic matter is causing a slightly warmer area below the tree. I’m not sure whether root respiration wold emit enough heat to cause this.

David Funderburk, retired Fernbank naturalist, observes:
At first glance, with just a small amount of snow, I don’t think this is unusual. I noticed much the same “phenomenon ” on my driveway that was bordered by a medium-sized red maple and other places in my neighborhood. My guess is that when the rather large snow flakes were falling there was just enough wind among the branches of her tree to blow the falling snow away before it hit the ground under the tree and the flakes fell a little farther away.

And my own theory: A surface sheltered by something above (even the small amout of shading from bare limbs) tends to be warmer (or cooler in summer) than its unsheltered surroundings. You can see this on home roofs on frosty mornings. The part of a roof sheltered by a tree will have no frost, because the covered area is less able to lose heat, thereby staying warmer.

My theory is that the ground under your tree is slightly warmer, so the light snow melted. The area outside the dripline was colder, allowing snow to accumulate better.