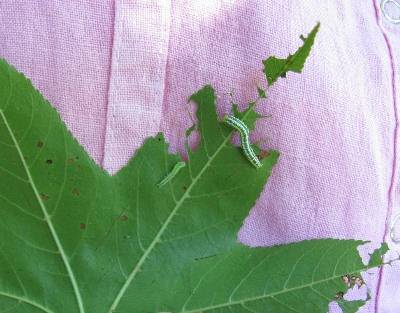 Q: I’ve noticed an odd thing happening to the sweetgum trees outside my office. Birds are eating the leaves, to the point where some limbs are picked clean. I’ve even seen a hawk clip and fly off with pieces of leaves!

A: Hawks eating the leaves? Now that’s a first!

You have an infestation of sweetgum defoliator caterpillars.

The last time this creature was noticed was in 1977 when lots of sweetgum trees in middle Georgia were defoliated.

Forester Terry Price took pictures of the damage and identified the insect as Paectes abrostoloides. This small brown moth lays her eggs in early summer on the host plant. Caterpillars hatch from the eggs and begin feeding. Birds eat the caterpillars, like Nature intended.

Terry noted that a virus appeared to wipe them out by the end of the outbreak. Since this only happens once in a blue moon, I don’t think you have much to worry about.