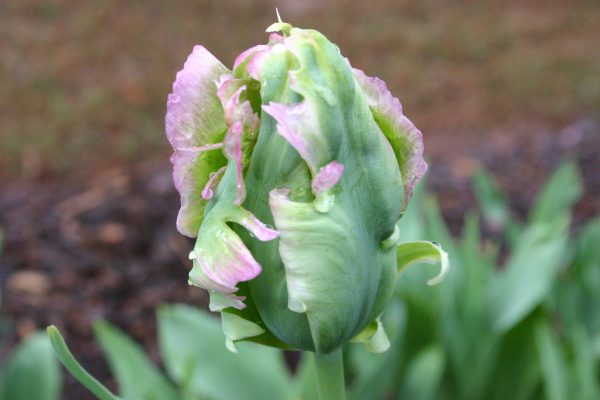 Q: Back in the spring I observed these tulips growing in a bed not far from my house in Atlanta. The petal damage was so severe I took several pictures. Do you recognize this problem? Could it be damage from being stored in a refrigerator in the presence of ethylene? Any other thoughts?

A: According to William B. Miller, Professor of Horticulture at Cornell University:

“Tulip disease #1 looks like tulip breaking virus (TBV, the disease that caused tulipmania…the streaks of yellow in the red background), perhaps with some botrytis (spots) thrown in.

“Tulip disease 4 looks like botrytis and simply an old flower

“Malformed 1 actually looks like it could in fact be a cultivar…there are many weird cultivars that have been bred/released.

So, overall, the only one that I would really put any credence of ethylene damage is the last one. Bear in mind that ethylene injury ONLY happens BEFORE bulbs are put in a cooler. The idea being that the production of ethylene and sensitivity (response) to it are both severely reduced at refrigerator temperatures, as compared to temps in the retail store/fall season garage in Atlanta.