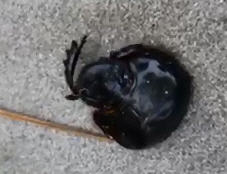 Q: I found this on my pool wall and have never seen anything like it before. It looks like a blob with feelers. I think after touching it and finding out it has a shell that it would be in the beetle family. Any ideas?

A: I don’t have a clue! Maybe someone else does.

Here are some guesses that came in:

Looks like what’s left of a beetle after the juicy body parts were eaten by a predator – just the head and thorax which haven’t completely died yet. Larry K.

It’s all that’s left of Jimmy Hoffa. Dave B.

I believe it is some kind of dung beetle. Luann O.

That black blob is the head and thorax only of a scarab beetle which has very recently been separated from the rest of the body and obviously still alive but not for long. William R.

And the answer is:

This is a Bess beetle (insect family Passalidae), which move slowly, and this video has the antenna sizing and movement about right.  It’s missing its abdomen.  Bill Blum, UGA Extension