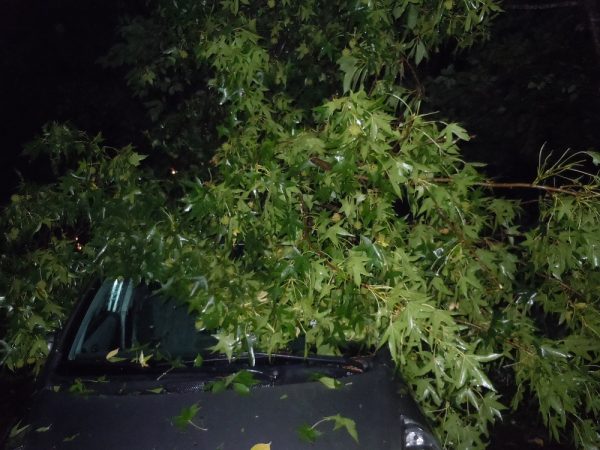 In early summer the Oregon power tool company sent me a 40 volt lithium-ion battery-powered pole saw to try out and evaluate.  I used it several times to cut out dead limbs and limb up small trees and it performed well.

But the reason I give it a 5 Star evaluation was the night it really came through for me:

My sweetheart and I were indoors one night watching a movie when a heavy rain and wind storm blew up. About 15 minutes after the storm arrived, we heard a loud thump from the front of the house. Since my home is surrounded by pine trees, I guessed a small limb had fallen on the roof, as often happens. The thump was not loud enough to cause concern.

But when the storm ended, we went outside to make sure no damage had been done to the roof. What should we see than her car covered by the leafy end of a huge sweetgum limb! And on closer examination we saw that there were three big limbs involved: 10″ diameter, 8″ diameter and 4″ diameter at their bases.

Not wanting to wait until morning to uncover the car and assess damage, I brought out my electric pole saw

What a marvel! The saw is well-balanced so I could stand back from the car and sever small branches wile my partner pulled them free. ( This could not have been done with my gas chain saw.) We removed enough weight that we could lift the big limb off the car roof….and discovered that there was no damage!

But we still had to clear the driveway so we could get out. We used the same method: I sawed branches while she pulled them to the side. Thirty minutes of vigorous effort gave a car-wide path we could use and we decided to close up shop.

I didn’t charge the battery overnight because I wanted to see how long it would last. Next morning I worked at least 30 more minutes, sawing the big limbs into pieces. Even the 10″ limb was no problem for the saw’s blade, although I had to work from both sides of the log.

Finally the battery died and I put it on the charger. Despite the manufacturer’s claim, it took close to 3 hours, not 2, to charge the battery full from a dead discharge. Even so, an hour of vigorous work was way more than I expected I would get.

I found this to be a great power tool…..appropriate for most suburban lots where occasional limbs and small trees need cutting but where a gasoline chain saw would be too messy and smelly to own.