Home » Gardening Q and A » Pine – Bubbles on Bark

Q: I have a very unique situation. I have several pine trees that foam during a hard rain. It looks like dish water because it has real bubbles around the base of the trunk and the suds run down these trees as well.

I have taken pictures to prove to people that I am not a crazy person. There is no smell to these suds. I picked them up in my hand and they are literally bubbles. The Georgia Forestry confirmed that this isn’t rosin or flux.

A: I love odd phenomena in the natural world. Lucky for me, this is one of the oddest I have encountered. My friend Dave Funderburk went out in the rain to examine his pine trees and found the same thing happening. Water running down the trunk of a tree is called stemflow.

Not having a clue about the bubbles, I sent your question to several colleagues.

Entomologist Gretchen Pettis wondered if the trees had been treated for bark beetles, since “there is quite a bit of surfactant (detergent) in sprayed insecticide”.

Shannon Pable theorized that since pine resin has been used in making of soaps…and has some ‘foaming’ properties….the rain could be mixing the water and the resin.

This theory was expounded upon by Steve Pettis, who said:

“My guess is that the foam is caused by the formation of a crude soap on the bark. During drought there is an accumulation of salts, acids and other particles from the air that coat the bark surface (soap is essentially salts and acids). When it rains, these mix with the water and go into solution. The froth (foam) is from the agitation of the mixture when it encounters a barrier (bark plates) during its flow toward the ground. Another example of this phenomenon happens on pavement after long dry periods following a rain. Car tires churn up frothy foam on the freshly wetted streets after a long drought.”

Steve’s explanation makes the most sense to me. So for now, that’s the theory I’m backing! 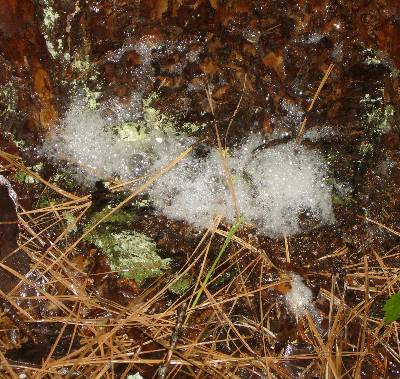 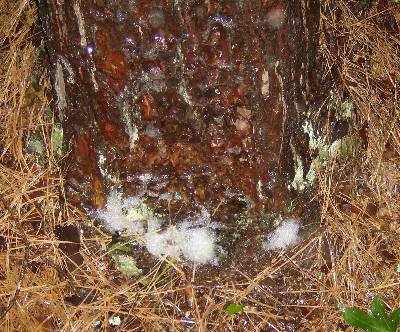 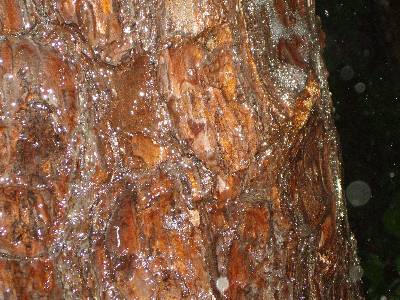 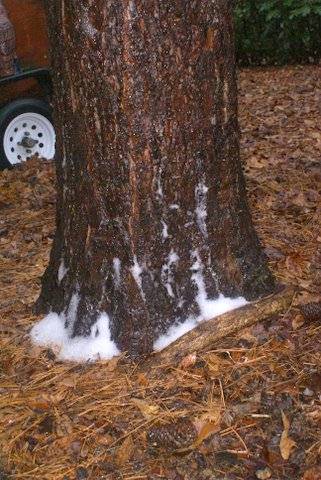