Winter lantana care simultaneously exemplifies the mystical pleasure and the aching frustration of gardening. Most lantana varieties are a bit too tender to survive a winter north of Atlanta. ‘New Gold’, in particular, seems to have a death wish every December.

On the other hand, Rick Berry, the proprietor of Goodness Grows Nursery in Lexington, introduced ‘Miss Huff’ lantana to the trade because it can usually survive cold winters in Athens.

That said, even ‘Miss Huff’ has a hard time coming back in spring if she has been fertilized heartily and made to grow vigorously the previous fall. She seems to do better the worse she is treated in summer.

Truthfully, there are two trains of thought on lantana pruning. Some say that if you prune them before springtime then water will drip down into the hollow stems and rot the crown. A second faction says that many fine perennials have hollow stems and are perfectly hardy when cut back in winter.

I align myself with the second group, mostly because lantana is such an ugly plant when left unpruned all winter. I think that it can be cut back to a height of twelve inches in December or January each year. Lightly cover the stems that are left with three inches of pine straw. It is my feeling that winter temperatures have much more to do with lantana’s survival than at what time it is pruned back.

Here’s a research project done by school children to prove my point: 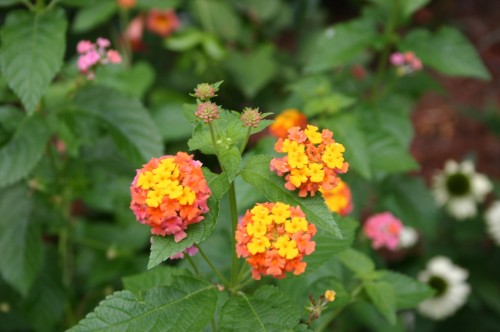 Tags For This Article: lantana, pruning