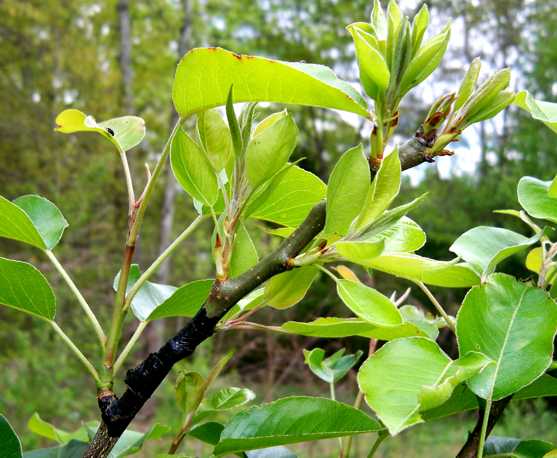 Mike A writes: I met you recently and told you about my experiment of trying to graft Bartlett onto Keiffer pear trees with Super Glue. You asked me to let you know how it worked. Apparently it works very well!

This is the very first graft I tried and it’s growing like crazy. The scion was completely dormant and all of this growth has popped out in the last week.

I just made simple angled cuts on both pieces and I put a tiny dab of glue in the very center of one piece, being sure not to use so much that it would squeeze out when pressed together. I aligned the cambium layers, applied a little pressure for a few seconds, and it bonded tightly. I then wrapped it with 3M MicroPore medical tape which I had in a first aid kit and painted it over with tree wound dressing. The glue held so well that there was no problem with it slipping or moving while I wrapped it. It probably took all of five minutes to do. I guess my next step is to try to remove the tape or at least split it down the sides so it can expand as it continues to grow. I hope I don’t kill it now because I’m really excited about how well it’s done. Here’s a follow up on the progress of my pear graft: I got the tape off successfully and you can see how the cambium has grown together and is starting to bark over all the way around the cut. This tape was a non-woven, almost paper type of medical tape and it came off pretty easily. On another graft I tried, I used a woven, nylon-like tape called 3M Durapore and when I tried to remove it it stripped off all of the bark under it and the graft died. Here’s all the new growth above the graft. It’s doing really well. I also cut off the top of the main trunk of the tree and did a cleft graft and both scions are growing very well. No glue needed here, just split the trunk with a big knife and insert a tapered scion into each side of the cleft, then tape it up and paint over everything with wound compound. I was surprised that this works because very little of the cambiums are in contact with each other, but it did!

Hopefully next year I’ll get some Bartletts on my little Keiffer tree.

The graft has grown huge. I got my first two pears on it just this last summer.  I’m afraid I let them rot on the tree because I was so proud of them and didn’t have the heart to pick them.