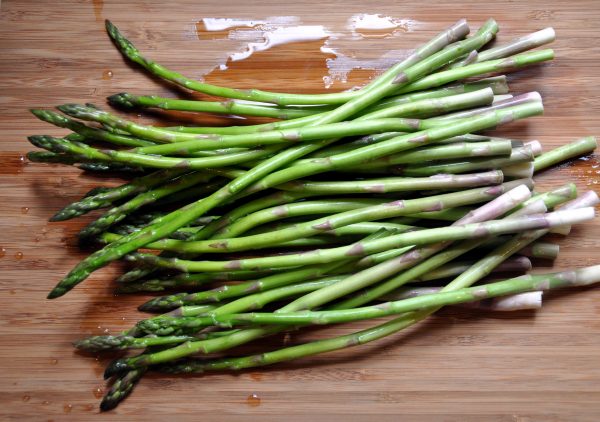 Asparagus officinalis
Asparagus is a cool-climate perennial plant that is fairly well adapted to all but the hottest areas of the South. Its tender spears, which arise from the crowns in the spring, make it an appetizing product of the home garden.

Asparagus is native to Europe and Asia where it has been cultivated for more than 2,000 years. The earliest settlers brought it to America, and abandoned plantings can still be found around old farmsteads and in volunteer patches along roadsides where is has “escaped” from cultivation by seed.

WHEN TO PLANT
Planning is essential for these plants because a well-prepared asparagus bed can last many years before needing reworking. The asparagus planting will take a few years to get into full production, so you will not want to move the bed around. Plant asparagus as soon as the ground can be worked in the spring. Asparagus plants consist of a crown with many dormant buds and several fleshy roots. One-year-old crowns are preferred, but 2- and 3-year-old crowns are available. They are more expensive, but produce earlier.

WHERE TO PLANT
Position the bed in a full-sun (8 to 10 hours will suffice) location away from trees or shrubs that may send roots into the bed. A poorly drained bed will deteriorate, and the plants will rot and eventually die out. Asparagus prefers sandy soil, which is generally better drained, warms up earlier in spring, and makes harvesting easier. Any well-prepared and well-drained soil will suffice, however.

HOW TO PLANT
Prepare the soil by spading it over and incorporating organic matter. Open a trench 6 inches deep and 15 inches wide, the length of the bed. Set the plants in the trench about 1 foot apart with the buds pointing up, then spread the roots in a uniform pattern around each crown. Replace 2 inches of the soil from the trench over the crowns, and water the plants thoroughly to settle the soil. Reserve the remaining soil to gradually cover the crowns as the plants grow during their first year; all of the soil is to be used in the first year.

CARE AND MAINTENANCE
In the first year, the plants will produce weak, spindly growth. As the root system develops, the spears will become larger each year, but the spears are not ready for harvesting until the third season. As soon as you complete the harvest, apply a complete garden fertilizer, such as 10-10-10, at the rate of 1 pound per 100 square feet of bed. The nitrogen stimulates the growth of the ferns that replenish the roots for the next year. Water the plants to provide about 1 inch per week during the season. Weed control is the most challenging part of growing any perennial plant, and asparagus is no different. Weeds compete with the asparagus for water and nutrients and make harvesting difficult. Because the bed is always occupied, there is no good time to get rid of the weeds without the chance of damaging the plants. Hoe or pull weeds as they appear, and use lots of mulch to keep more from coming up. No serious diseases affect asparagus.

ADDITIONAL INFORMATION
Harvest asparagus spears beginning in the third season, and limit harvesting to 3 weeks after the start of harvest. The following year and thereafter, harvest spears from the time they appear in spring until late may or June. Cut the spears when they are 6 to 8 inches long; discontinue harvesting when spears become noticeably smaller. Europeans and recent immigrants to the U.S. prefer blanched asparagus. They hill the plants with sand carefully packed over the developing spears. When spears begin to emerge, cracks appear in the sand, and they pull back the sand to reveal the white spears. After they cut the spears, they replace the sand and pack it down again. they often peel the spears to remove any fiber and make them very tender additions to a meal. Blanching is not commonly done in the South.

VARIETIES
Asparagus plants are either male or female. The female plants produce more but smaller spears than the male plants. The female plants produce seeds, an activity that takes energy that could be stored up in the plants for better production the next year. Male plants direct the energy into making spears. The old-line varieties such as ‘Waltham’ or the ‘Mary Washington’ or ‘Martha Washington’ are still available but are mixed male and female plants. They are not nearly as productive as the newer kinds. Recent introductions are either mostly male or all male. Syn 53, Syn 4-362, UC-157, Viking KBC, Jersey Knight, Jersey Prince, and Jersey Giant are vastly improved varieties derived from a selection that produces only male plants. Try to plant the latest introductions; the bed will last a long time, so it pays to plant the very best.