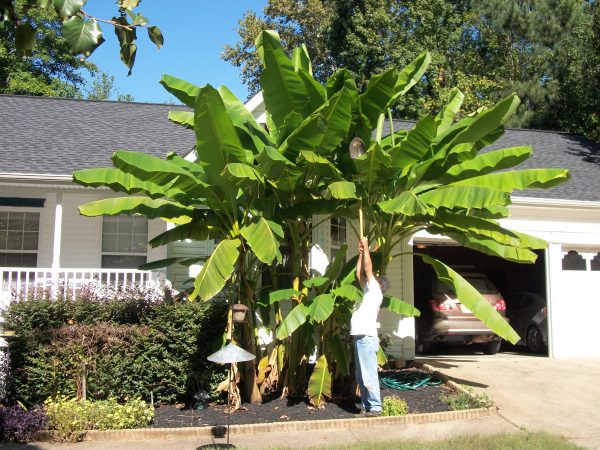 Musa spp.
Even though it is considered a tropical plant, you too can grow a Banana tree. Harvesting fruit, though, is possible only in coastal areas. The trunk is not a true stem but only a cluster of leaf stalk bases.

The perennial portion of the plant is the underground corm. It produces suckers, which are thinned to 2 – 3 per corm: one “parent” sucker for fruiting and one “follower” to take the place of the parent after it dies. Low temperatures limit bananas primarily to ornamental status in much of the Southeast (Zones 7b and warmer). Frost kills plants to the ground, although the corm usually survives if mulched heavily.

Vigorous young suckers can be brought in a tub into a basement or heated garage when the first frost threatens. Plant back outdoors when the soil is very warm. Bananas prefer deep, well-drained soil but they can tolerate clay as long as the roots are not constantly wet. Some varieties grow quite large so plant them in full sun, at least ten feet from other plants or buildings. The top of the plant will produce a bloom stem approximately nine months after a sucker begins to grow. Fruit is ready to harvest three months later. Pollination is not necessary to set fruit. Bananas require heavy fertilization, at least a pint of 10-10-10 per month per mature plant, and regular watering. Dwarf types may be grown in tubs exclusively and moved indoors to sit before a sunny window, dreaming of their tropical heritage.

Varieties which may produce fruit for you: ‘Cavendish’, ‘Raja Puri’.

Many of the other ornamental Bananas produce small fruit full of very hard, large seeds and usually are not edible.