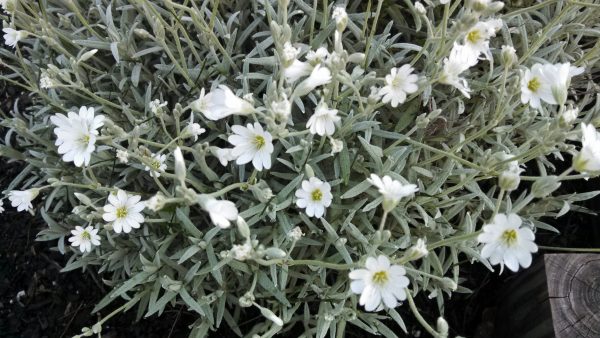 Chamomile, sometimes called Roman chamomile, is a low-growing 4 to 6-inch tall perennial. German chamomile is a tall, erect, 3-foot annual. Both chamomiles are members of the composite (daisy) family and the flowers of both are brewed for chamomile teas. The flavor is the same.

WHEN TO PLANT
Set out started plants from a garden center or catalog supplier in the spring, or sow seeds in the spring or fall. Freezing and thawing seem to improve germination, so planting when the weather is still cold doesn’t pose a problem. For German chamomile, 1 to 2 plants are probably plenty. For Roman chamomile, which is smaller, more plants will be needed.

WHERE TO PLANT
Both Roman and German chamomiles prefer a full-sun location (8 to 10 hours will suffice) that has dry soil.

HOW TO PLANT
Because seeds of Roman chamomile grow well in cracks and crevasses and it has flowers, you may want to plant it in a rock garden if not the vegetable garden. Grow German chamomile in any open sunny spot in the garden. Be aware that after it is started, German chamomile will reseed easily and may become a nuisance.

CARE AND MAINTENANCE
Roman chamomile will spread if the flowers are mowed off the first year. Pull or hoe out any weeds that appear. These plants need water only in a severe drought, otherwise they withstand dry weather well.

ADDITIONAL INFORMATION
Harvest the flowers when the florets begin to reflex (bend back). Remove the flowers from the stems because the stems will cause the flavors of the tea to be bitter. Air-dry the blooms on a screen tray and store them in tightly sealed glass jars. Over the years, people have credited soothing, refreshing chamomile teas with all kinds of medicinal cures for things such as digestion, upset stomach and nightmares. You’ll need several flowers to brew the tea; the number will depend upon your taste.