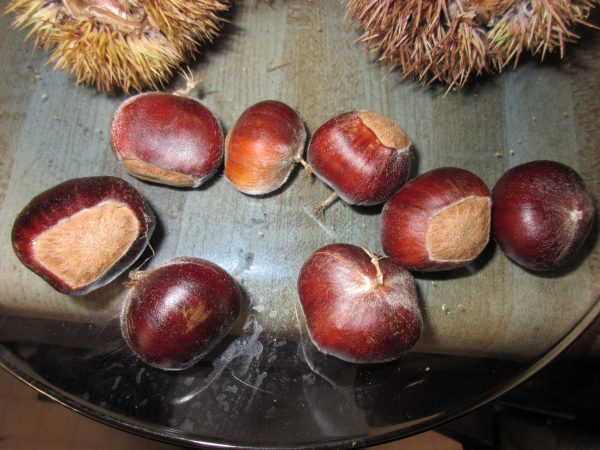 Castanea spp.
American Chestnut once grew throughout the Northeast, Midwest and Southern mountains. Farmers depended on the nuts to feed their families and livestock and they were a major part of forest animals’ diet. The rot-resistant lumber was used for everything from furniture to fence posts.

Unfortunately, Chestnut blight fungus Endothia parasitica was introduced from Asia in the late 1800s. It spread through the North American forests and by the early 1950s virtually all American Chestnuts were destroyed. The blight does not kill the root system, so new sprouts grow and form small trees that are reinfected and killed. Still, there are other members of the Chestnut family which can be grown for their nuts. The major Chestnut species found in the South are the American Chestnut (Castanea dentate) and Chinese Chestnut (Castanea mollissima). Minor Chestnut species such as chinkapin (Castanea pumila and C. floridana) are occasionally seen in undisturbed woodlands.

The blight resistance of the Chinese Chestnut was recognized in the early 1900’s. Chinese Chestnut is as hardy as the peach and can be planted throughout the South. The burr (fruit) of the American and Chinese Chestnuts normally contains three nuts. The chinkapins have one nut per burr.

WHEN TO PLANT
Plant in fall, after the first frost, to take advantage of root growth during the winter. Otherwise, plant in spring as soon as the soil dries enough to be worked. Chestnuts require at least 2 varieties for pollination.

WHERE TO PLANT
Chinese Chestnuts and Chinese-American hybrids grow best in well-drained soil in full sunshine (8-10 hours/day) They are small, spreading trees, reaching 40-50 ft in height. Plant as far away from your house as possible: the flowers have a disagreeable, rancid odor in spring. Trees have lustrous green foliage, turning yellow-bronze in fall. Avoid planting low on a hillside where frost pockets (areas of cold air) occur.

Some nuts are produced on solitary trees but they will bear more nuts with cross-pollination from two different varieties. A spacing of 30 feet apart is ideal.

HOW TO PLANT
Dig the hole deep enough so that the tree can be set at the same depth that it grew in the nursery. Firm the soil occasionally with your shoe as you fill the hole to soil surface level. Pour ten gallons of water at the base of the tree to insure the soil around the roots gets thoroughly wet. Do not place fertilizer in the hole. Mulch trees with a three-inch layer of pine straw, leaves or wood chips

Chestnuts generally develop an attractive shape on their own. Head back branches that are too long and prune off lower branches to aid lawn mowing. Stems that form a sharp angle with the main stem should be removed as soon as possible. The tight V-crotch formed by such branches is weak and susceptible to splitting.

HARVEST
The nuts drop during a two week period. Chestnuts must be harvested every other day. Numerous fungi and bacteria attack the nuts on the ground, causing rapid decay and spoilage. Use gloves when harvesting; the burrs can be painful to handle. Dip nuts into hot water (kept at 150 F) for 30 minutes to eliminate surface molds and chestnut weevil. Afterwards, place the nuts in a shady, cool, and well-ventilated spot to cure them. In the curing process starches change to sugars enhancing flavor. After curing for a week, nuts should be refrigerated before consumption.

PESTS
The most serious problem for chestnut growers is chestnut weevils, which lay their eggs in the ripening nuts. When the nuts fall to the ground the eggs hatch and the larvae eat their way out of the nuts and burrow into the ground. They stay there until the following year, when they emerge to mate and lay more eggs. Only the adult weevils are controllable with insecticides. Contact you Extension service for recommendations. Spray the burrs weekly for the last month before nuts are released from the burrs. An organic control that could be reasonably effective is the use of chickens or Guinea fowl under the trees to eat the larvae and pupae of the weevils. After several years of this control, few weevils will remain.

Eaton
flavor, texture and sweetness are among the best, ripens 3 to 7 days earlier than most Chinese Chestnuts, 30 to 40 nuts per lb.

Crane
nuts are dark-red to brown in color, well adapted to the South. 26 to 32 nuts per lb.

Hybrid crosses between a blight resistant American Chestnut and naturally resistant Chinese Chestnut trees were introduced several years ago to replace the vanished American Chestnut. These ‘Dunstan’ Chestnuts show a combination of American and Chinese traits.