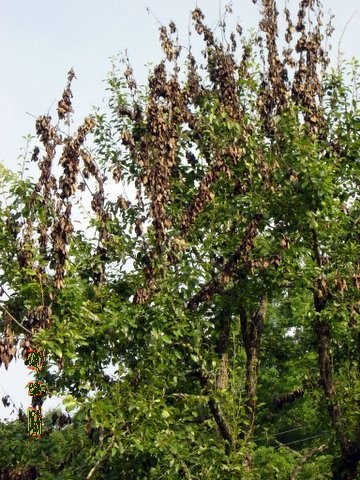 Apples, crabapples and pears are susceptible in spring to a bacterial disease known as fire blight (fireblight). The most noticeable symptom is the sudden death of the new leaves at the end of a branch. The dead sprouts may be scattered on the tree or may only occur on one side. If many branches on a pear tree are infected, they may all turn black, like the tree was burned, leading to the name “fire blight”. It is spread mainly by bees and flies that visit infected flowers when the tree is blooming and then take the disease to other parts of the tree.

during and after bloom to control the disease before it worsens. Most fungicides will not control this disease. Copper fungicides (click for sources)

are bactericidal but they might cause russeting (freckles) on the fruit.

PRUNE BRANCHES Once you see the black leaves, pruning out and destroying the infected branches is the best course of action. The canker that oozes the harmful bacteria will be at the base of a dead twig, so make your pruning cuts 4-6 inches back from the black leaves into healthy wood on the branch.

STERILIZE PRUNING SHEARS Your pruner may carry fire blight bacteria from wound to wound unless you sterilize it after each cut. Make a solution of 1 part alcohol or chlorine bleach to 4 parts water and pour it into a shallow pan, such as a loaf pan. Submerge the pruner for five seconds after you make a cut. Collect all pruned branches and remove them from the premises.

RESISTANT TREES Before planting an apple, crabapple or pear choose a variety resistant to fire blight. ‘Bartlett’ pear, ‘Rome Beauty’ apple and ‘MacIntosh’ apple have no resistance to the disease and should not be planted by a homeowner. ‘Red Delicious’ apple and ‘Orient’ pear are resistant. The ornamental ‘Bradford’ pear is somewhat resistant but other ornamental pears like ‘Aristocrat’ and ‘Capital’ are very susceptible.

Some years, fire blight is a minor problem. But when we have a long, mild spring, fire blight can be devastatingly obvious in many landscapes.

Note: Streptomycin is rarely carried by garden centers. Your best source is to look for suppliers on the Internet. Use the search phrase “Streptomycin fire blight”.

Notes on Fireblight Control from a Pathologist