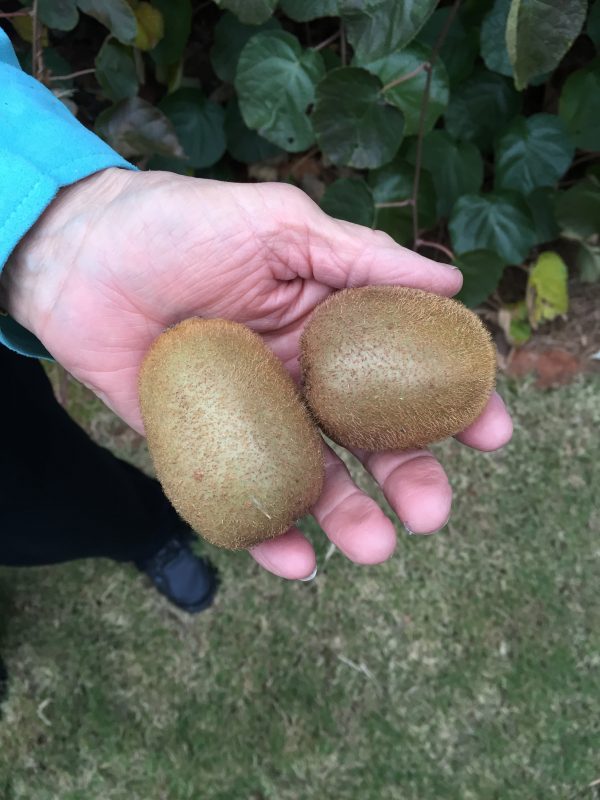 Actinidia spp.
What a difference a name makes! Chinese Gooseberry is not a fruit name that invites tasting but when American importers renamed it “Kiwifruit”in the 1960’s the brown, fuzzy fruit gradually became known in grocery stores across the South.

The fruit typically consumed is Actinidia deliciosa. A smaller-fruited, smooth-skinned variant has the name A. chinensis. ‘Issai’ hardy Kiwi (A. arguta) is sold by mail order nurseries for dooryard planting. It bears male and female flowers on the same plant while A. deliciosa has separate male and female plants. A. kolomikta is grown as an ornamental vine for its pink and white variegated younger leaves. In southwestern China, where temperatures are warm and winters mild, kiwi is found climbing into forest canopies, often draping entire trees like Kudzu.

Plant Kiwi in the spring after the last frost. Although a mature plant can tolerate freezing temperatures, young plants cannot. Do not plant in low areas where cold air settles. Kiwi does best in sandy loam soils in full sun but clay soil can be amended with organic matter to make it hospitable to the vine. Train Kiwi onto a single-wire trellis and manage it like a muscadine Grape. You must plant a male Kiwi for every four female vines. Pollination is performed by bees but they prefer the male flowers so be sure to plant a pollinator-friendly flower garden nearby.

Varieties to look for: