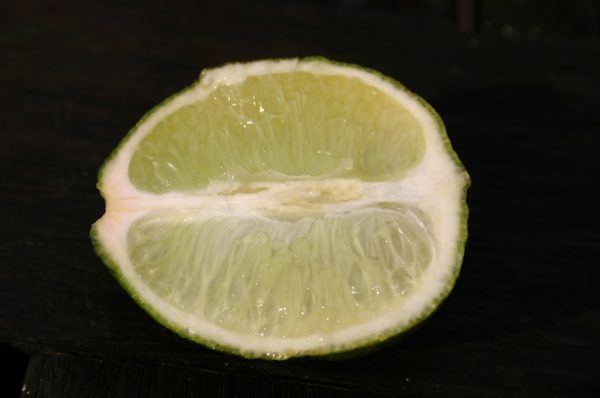 (The source of this material is unknown. Please email if you can find it.)

Seeds are produced in the plant kingdom, generally, as a result of pollination. Many of the commercial species in the citrus genus, are self-fertile, meaning that the pollination of a pistil (female flower part) may occur by pollen from stamens (male flower part) on the same plant.

Additionally, most citrus varieties express some level of parthenocarpy. Parthenocarpy is the ability of plants to develop fruit without pollination (which means no or very few seeds if trees with fertile pollen are not located nearby). Most varieties of navel oranges, such as Parent Washington, Frost Nucellar, Atwood, Fisher, Bonanza or Lane Late, produce mostly parthenocarpic fruit. These navels rarely produce seeds because they are male sterile (i.e. they produce no pollen) and even if pollinated the mother cells will tend to abort. Occasionally a seed may develop but the seed is usually produced asexually.

A similar form of seedlessness exists for some of the satsuma mandarins, such as the Frost Owari, Okitsu Wase, or Dobashi Beni varieties. Parthenocarpic fruit has a greater tendency toward early drop. Hot weather in late spring and early summer, or other stresses, can greatly increase early fruit drop in navels and satsumas. Cross pollination almost always improves fruit set in all varieties of citrus and this translates into increased number of fruit. For the same number of fruit per tree, pollinated fruit tends to be largerin size but seedier.

A major vector of citrus pollen is the honey bee. The degree of seediness of the fruit of a given mandarin tree often becomes a function of how many other varieties of pollen-bearing varieties of citrus are within a bee’s flying distance from that tree. The weather during the pollination period in the spring is also a factor in that bees are less effective pollinators during cold, wet and windy weather.

Parthenocarpic mandarins, such as the ‘Page’ mandarin, can be made seedless by the use of netting over small trees that exclude bees, however, if the mandarin requires cross pollination, such as many of the clementines, excluding bees will also result in poor fruit set.

Even seedier varieties, such as ‘Olinda’ Valencia, ‘Lisbon’ and ‘Eureka’ lemons, and the ‘Marsh’ grapefruit, occasionally produce parthenocarpic fruit, although, generally, the fruit will average three to five seeds.