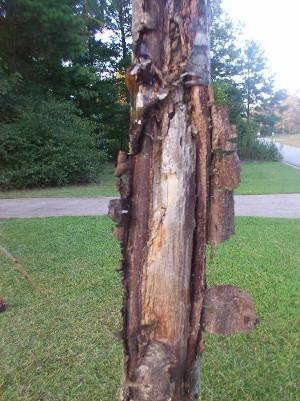 Q: I’ve had a weeping cherry for six years. It bloomed beautifully for three years, then started declining to only a few flowers each year. This past year it never bloomed and did not produce leaves until June. This is when I noted the trunk of the tree. What should I do now?

A: Remember the Black Knight in “Monty Python and the Holy Grail”? Even when both of his arms, and both legs, were cut off by Arthur, he was adamant that he would not die. “I’ll bite your legs off!” he shouted as Arthur and Pansy passed.

Your maple reminds me of the Black Knight. Even with grievous wounds, it has refused to die so far. We aren’t told the fate of the Black Knight but I’d bet his end came soon after his appendages were removed. So it is for your maple: once the bark is severely damaged, the end comes rapidly.

I can’t tell from the pictures how the damage occurred but your best course is to remove the maple and replace it with a healthy tree.