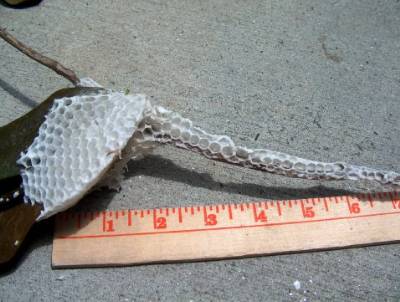 Q: I found these wax combs on a bush in my front yard in May. There were no signs of insects in the comb or around it on the bush. The cone is some type of wax. Can you please identify the builder?

A: You found a spot where a swarm of bees set up housekeeping temporarily.

Although swarms are not as common now as they used to be, a queen, followed by thousands of workers will depart a hive and look for new quarters. Where she temporarily rests, the workers will start building wax comb, just as they would in a hive. When she leaves, the comb is abandoned.