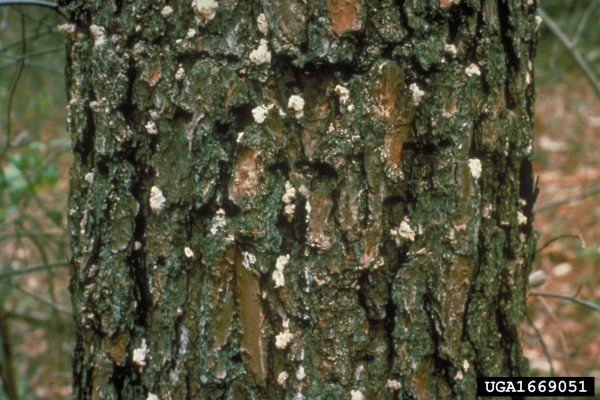 When I was a boy, one of my favorite pastimes was to stack up several soup cans, walk a few paces away, then throw rocks at the tower of cans until they tumbled down. I was convinced that if I worked at this long enough, I could become the next Sandy Koufax on the Little League baseball mound.

Unfortunately, throwing rocks (much less baseballs) accurately, was a skill that still eludes me. But with each summer’s dry weather, thousands of pine trees are being set up for a deadly tumble by Mother Nature: a devastating attack by pine beetles.

Several kinds of beetles ferociously attack drought-weakened pine trees in summer. The Southern pine beetle is the most feared. In September, homeowners typically notice a brown-needled tree, distinct among the other green pines around. By the time the tree is brown, it’s too late! The tree must be removed to protect the other trees nearby.

WHAT ARE THEY? Southern pine beetles are tiny – about 3/16″ long. Females excavate a tunnel through the pine bark into the cambium layer underneath. They lay eggs there. The larvae burrow away from the tunnel and feed on the living bark tissue. As the adult beetle excavates, she introduces a fungus, which clogs water transport tubes and contributes to the death of the tree. Beetles are attracted to damaged trees (lightning, storm or fresh pruning cuts) by the smell of pine sap. When they invade a tree, the adult beetles secrete a chemical which may attract hundreds of other pine beetles to the area.

DIAGNOSIS OF INVASION Trees which have been infested for several weeks will rapidly turn brown. The trees around a dying tree may show “pitch tubes”. The pitch tube is simply pine resin which has oozed out of the tree and hardened on the bark. They will look like white pieces of popcorn on the bark. Shot-holes in the bark show that many beetles have matured, chewed exit holes and flown off to find new breeding sites. Resin and shot-holes can occur from three feet off the ground on up to where the tree narrows to 3″ in diameter. On mature trees this can be 75′ aboveground!

WATER – THE BEST PREVENTION Remember that drought-stressed trees are particularly prone to beetle attack. When you water your newly planted annual flowerss and shrubbery, don’t forget your trees. As long as water restrictions are not in place, water every plant in your garden that needs moisture. If water becomes scarce, it makes more sense to protect the big trees that could cost hundreds of dollars to replace rather than preserving a ten dollar flat of petunias.

TREATMENT AFTER THE FACT Since damage can occur high in the tree, homeowners can not usually apply chemicals effectively. A few insecticides are labeled for beetle control – but they must be applied up into the top of the tree. Both chemicals are hard to find and must be used with care. Several tree companies in Atlanta have hydraulic sprayers which can apply an insecticide effectively. Homeowners can spray small trees – but spraying a mature tree halfway up the trunk with insecticide is useless.

(Note from Dr. Dan Horton: “Bifenthrin (Onyx) is indeed a good SPB material, much better than permethrin. Dr. Wayne Berisford has a paper which depicts SPB control according to where its applied, spraying the top half of the tree gave as good control as spraying the whole tree. Spraying down low is of very limited value.”)

Injectable insecticides are ineffective. It takes too long to get the chemical to where the insects are boring and the insecticide is not distributed uniformly.

1. If you have a sick pine, make sure the problem is borer damage. Pitch tubes are definitive but “sudden death” of the tree could be caused by other factors.

2. Infested trees should be removed as soon as possible. The beetles which are present can rapidly attract hundreds more beetles to the area.

3. Treat pines around the infested tree with insecticide, preferably applied by a professional tree care company. Insecticides are not 100% effective if trees are already infested. Spraying must be done with care, avoiding drift. The best prevention for pine beetles is a healthy, well-watered tree.

4. Be a “nosy neighbor”. Bring your neighbors’ attention to dying pine trees in their yard. If pine beetles have been found in your neighborhood, use binoculars to examine the trunk of nearby trees to determine if the beetles have spread.