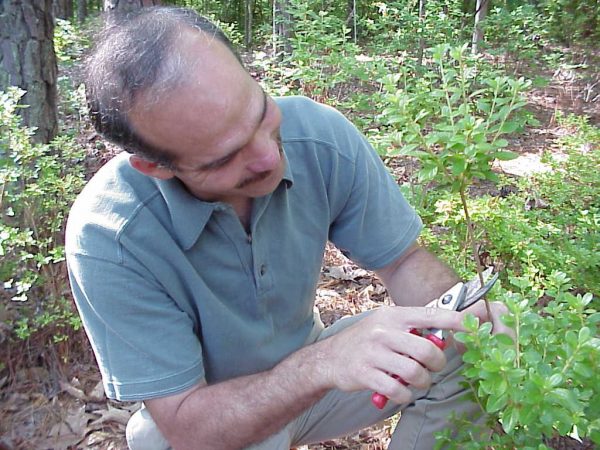 If your azalea has been growing in a spot for a few years, it has likely reached the size you want. But the size an azalea would like to achieve might not agree with the size you’d like.

If your azalea has several thin sprouts extending above the rounded top of the plant, it still has aspirations to be bigger. You can keep it at its proper height by following each sprout to its origination point and clipping it out. Since it is dark inside the plant, no more sprouts will spring up from that point this year.

This is time-consuming but it proves the point that plants should be planted in a spot where they can grow to their natural height so you don’t have to prune them every year.

If your azalea is still small and you want it to be larger, the sprouts require a different treatment. Azaleas in the Callaway Gardens azalea bowl have been in place for less than a year. Parker Andes wants them to be twice as large but still rounded. “We have a secret tool for this operation,” he announced. “A machete!”

He explained that controlling the new growth on the azaleas is easy to perform by clipping each sprout in half. New shoots (or “breaks”, as Parker calls them) will form at the clipped ends and will grow six inches by summer’s end. The result is enlarged plants without the scraggly look of a fast-growing azalea.

“This is probably my favorite job,” said Parker. “When an azalea is way too tall or badly misshapen, if I see vigorous growth at the base, I know I can make it look ten times better in a minute or two.”

He demonstrated on an old azalea that resembled a leafy umbrella standing in the woods. There were several sprouts at the base, struggling to reach the sunshine blocked by the leaves above. With three cuts, the azalea went from six feet tall to eighteen inches high.

See Pruning After Azalea Show is Over one hour after pruning