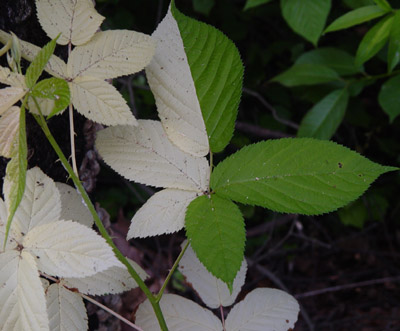 Q: On a walk near our home we found what appears to be a blackberry bush on which the leaves on one side of a few stems are completely white. Some are half white and half green, including the stems.

A: It’s a botanical phenomenon called a chimera.

Basically, the bud that produced one of these leaves had a mutation in its cells, causing those cells to grow but not produce chlorophyll. Many common variegated plants originally came from chimeras: variegated dogwood, variegated vinca vine, ‘Burgundy Glow’ ajuga, variegated hosta, variegated hydrangea etc.

Some variegated plants are attractive and are propagated by growers and sold at nurseries. Others have leaves that are so lacking in chlorophyll that the plant never prospers.

It’s likely that you could propagate your variegated blackberry from stem cuttings…. but root sprouts would not produce variegated leaves. Try it and see what happens! You could name it ‘Half and Half’ blackberry.