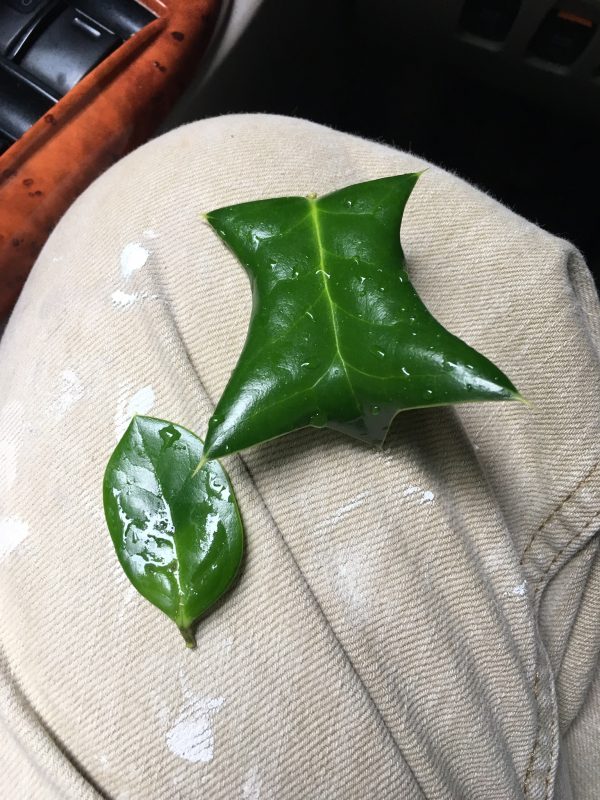 Q: I have a row of holly bushes along my front porch. There are two different types of leaves on these bushes. Most are the smaller one you see in my photo. The larger grows faster but I prefer the smaller. Why are there these differences in the same row of bushes?

A: The rounded leaf with one pointy spine is very likely dwarf Burford holly (on the left). It was discovered many years ago as a genetic variant of its parent Chinese holly, Ilex cornuta. Chinese holly produces leaves with several spines on its leaves (on the right).

You can understand why nursery people preferred growing the less-threatening dwarf Burford holly for landscapers.

But Burford holly is well known to revert to its parent through root and trunk sprouts. The original dwarf Burford hollies that were planted in front of your house produced sprouts for some reason, which grew to become the fast-growing multi-spined Chinese hollies.

It won’t be easy to remove the less-desirable shrubs. I have never gotten satisfactory control of Chinese holly by spraying with herbicide or by applying glyphosate (Roundup) to the cut stump.

Your only recourse is to saw the unwanted Chinese hollies off at the roots and then dig them out completely.

By the way, every Burford holly in the world originated at Westview cemetery in Atlanta, from a chance planting of Chinese holly seeds or seedlings that were given to the gardener there.