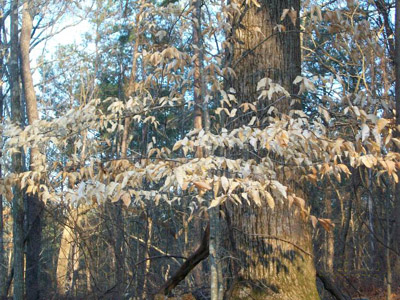 Q: What is the small tree that has light brown leaves in winter? I can see several of them clearly in the woods near my house.

A: I’ll bet you’re seeing American beech, Fagus grandifolia, trees. They are well-known to hold their leaves until new ones appear in spring.

Here’s a summary of the phenomenon by an Extension expert in Minnesota:

“Deciduous trees are supposed to drop their leaves in autumn, right? So why are there still lots of brown leaves clinging tenaciously to certain trees in our neighborhoods and natural areas? In a word: marcescence.

“Deciduous trees that hold onto their leaves through the winter are described as marcescent (mahr-CESS-ent). Some tree species are more likely to show marcescense than others. In this region, oak species (Quercus) including pin oak, red oak, and white oak are the most noticeably marcescent trees. American hornbeam, also known as blue beech (Carpinus caroliniana), and ironwood, aka American hophornbeam (Ostrya virginiana) also tend to hold leaves. Other trees such as sugar maple are occasionally marcescent.

“In autumn, the leaves of most deciduous trees develop an abscission layer where the petiole (leaf stalk) meets the branch. This allows the leaves to fall off without leaving an open wound on the stem. Dry leaves stay on marcescent trees because the leaves didn’t develop the normal abscission layer in autumn.

“Marcescence is often a juvenile trait and may disappear as the tree matures. It also may not affect the entire tree; sometimes leaves persist only on scattered branches. Marcescence is typically based on a tree’s genetics, but sometimes weather plays a part. In years with early freezes tree leaves may be killed before developing an abscission layer, resulting in persistent brown leaves on many trees that aren’t usually marcescent. –Nancy Rose, University of Minnesota

Nearly Native Nursery is one of the only local nurseries to sell the American Beech.