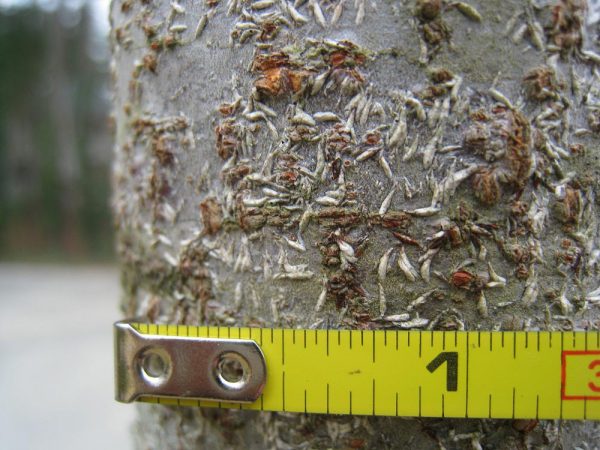 Q: I have noticed many insect eggs located on the bark of my Japanese zelkova trees.. I have also noticed these to a lesser degree on various types of maple trees. You can notice small a hole where an insect has emerged from the egg case. Can you identify these?

A: UGA plant expert Elizabeth Little says “They could be oyster shell scale but can’t say for absolutely sure from the image. They are shaped like this and they attack both of these hosts. The eggs are under the dead female’s body and they will emerge soon. The holes may have been made by parasites.”

Scale insects damage their host by sucking sap. You can scrub some of the adults from the tree with a plastic dish scrubber, but use a gentle touch. Better control can be had by spraying the entire tree in winter with a horticultural oil such as SunSpray. This suffocates the insects.

Further control can be gotten by spraying the oil on limbs and twigs in April and again in May when the young crawlers are emerging from under the adult scale shells.