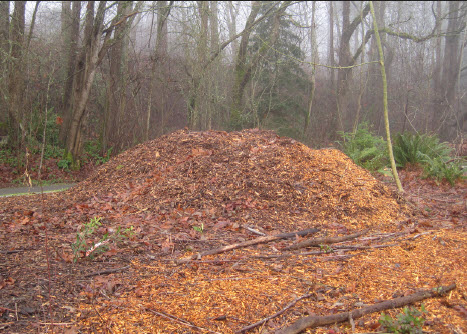 I believe my third grade friend Thomas Robinson told me my first urban legend. With all the solemn believability a nine-year old could muster, he recounted the story of the Doberman found choking on two severed fingers. “It really happened!” he exclaimed. “My brother knows a guy who lives on the same block as the second cousin of the dog’s owner!”

It amazes me that on my radio show I get questions about the “safety” of using wood chips.

Wood chips are readily available and are quite useful in the landscape. My neighbor Kim has an area that isn’t paved where he parks the family’s second vehicle. Every six months, Kim contacts a local tree company and asks them to drop off a load of chips when they are in the neighborhood. He uses the chips as mulch under shrubs and trees in the back yard, as ground cover in the dog kennel and as filler for the ruts under his SUV. I have never worried that he should have a fire extinguisher handy when he receives his chips. If you have ever wondered how and where to use wood chips, here are the facts:

CHIPS ARE NOT POISONOUS

Dr. Kim Coder, Extension Forester at the University of Georgia, says that wood chips do contain small amounts of chemicals that can harm plant roots. However, this can happen only when a thick layer (six to twelve inches) of chips is spread under a plant, not the thin layer most folks use.

Black walnut trees contain a chemical that inhibits plants that grow nearby. Most of the inhibition, called allelopathy, comes from the tree roots. To be on the safe side, don’t put fresh walnut chips under your azaleas and do let walnut leaves rot before tilling them into a vegetable garden. Wood chips from other trees, though, can be spread in a two-inch thick layer under trees and shrubs without harming them.

Okay, they can rob nitrogen from your other plants – but only if you mix the chips into the soil. On top of the soil? No problem. Bacteria and fungi in the soil need lots of nitrogen to break down the coarse fiber in wood chips. If the chips are mixed with the soil in a flower bed, the plant leaves will turn light yellow (chlorotic) because the bacteria abscond with the nitrogen they need.

Don’t worry if you just finished tilling wood chips into your Mom’s bulb bed. Just remind her to fertilize twice as often next spring to supply the nitrogen that soil creatures and her plants need. The same advice applies when you have had a tree stump ground down in your lawn. The shavings are impossible to remove completely before planting grass. Mix a pint of 10-10-10 fertilizer into the area and plant without worry.

Termites are an integral part of nature. Their job is to decompose the limbs and stumps you are too busy to remove.

Termite expert Chip Prevatt points out that by mulching the landscaped areas around your property, you create the perfect environment for termites to live, eat, and thrive. While these areas are “attractive” to the termite once they randomly find them, they do not (nor does the mulch itself)  “attract” termites. Termites do not smell the mulch (or other cellulose material) and come running.

Industrial compost piles are much larger than a homeowner pile would ever be. If a homeowner chip pile contains lots of green wood, the center of the pile may become hot – but not hot enough to burn. A pile six feet tall and fifteen feet wide might give off a small plume of steam (condensed water vapor) on a chilly morning. Fortunately, though, steam is not the same as smoke.

I tested a compost pile last summer that had been purposely built to heat up quickly. On a ninety-five degree day, the center of the pile registered one hundred and thirty five degrees Fahrenheit. It was too hot to touch, certainly, but it would have had to be tremendously hotter to make smokin’ compost!

Sharon L. contributes: We had a big load of wood chips delivered and dumped on our driveway several winters ago.  We came home late one night and saw smoke coming from the pile in the headlights.  My husband got a rake and raked to the middle and it had red hot glowing embers throughout the whole middle of the pile.  He got the hose and doused the pile and cooled it off and we left it spread out and of course distributed it as fast as possible.  There was no hot center again but there were a lot of wood chips that were totally charred. We were really upset that it looked like we almost had a fire so close to the house especially since it had rained the day before and the chips were wet.

Say, did I ever tell you about the guy who tried to make methane from pig manure? Seems he left it in his second bathroom to “cook” overnight and it blew up! Since it was a little-used room, he just taped the door shut and ignored it until he was ready to renovate a few years later. Now that’s a true urban tale!