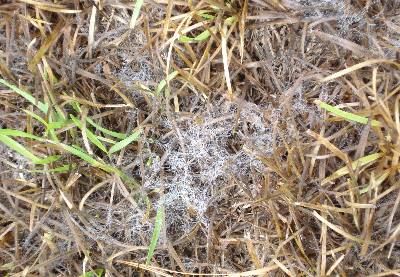 Q: I bought a house a year ago and had it sodded with centipedegrass. Since the sod was put down in October some parts never took firm root by winter. When spring arrived some areas never greened up.

Then came great rains in June. My grass looked great! Then July/August we had little rain. I watered on my allotted days in the mornings and after work.

Now I have these dead brown areas all over my yard! I have watered regularly. I do not understand. Is this brown patch? Are these insects?

Please note the white spider web like substance I took a picture of. It is everywhere!

A: Two bad decisions have led to a losing lawn. The first bad decision was to lay centipedegrass sod in October. This was way too late. It should have been done in May or June. Your best bet at the time would have been to plant ryegrass to hold the soil and then lay sod the next year.

The second bad decision was to water so heavily. You should have been watering deeply one time per week – in the morning, not later in the day.

The spider web stuff is the mycelia of fungi that are decomposing dead grass. The grass died from delayed cold damage and by too much water.

At this point (September), turn off the irrigation, don’t fertilize, and let the grass go dormant.

Next year fertilize one time after the lawn is 75% green in early May.

Water only if it gets REALLY dry.