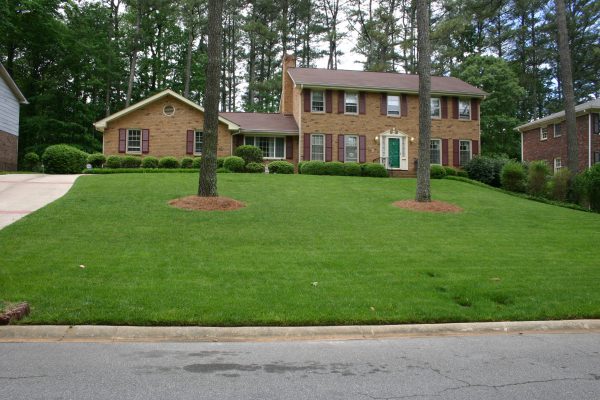 Q: What are the physiological processes involved when fescue thins out during the summer in the heat and humidity in Atlanta?

A: Look at it this way: if a rock ‘n’ roll band cranked up next door every night when you went to bed, you’d probably get pretty grumpy, right? Approximately the same thing happens to fescue when it tries to go to sleep each night and temperatures are above 70 degrees. It requires cool nights to recover from daytime heat. If the night stays warm, the grass can’t make the energy it needs to grow the next day.

Clint says fescue should be irrigated to avoid wilting in summer but only to supplement natural rainfall, not to exceed one inch per week. Don’t fertilize; the root system is limited in its uptake ability and there is no need to stimulate a stressed plant which does not want to grow under adverse climatic conditions. Raise the mowing height to three and one-half inches. This encourages the deepest possible rooting and helps shade the soil surface, which reduces water loss and soil heating.

This last suggestion is the most difficult for most homeowners: be patient and wait for environmental conditions to change. Tall fescue is hardier than it is given credit for. Once the weather changes in September, most people will be surprised how much of their tall fescue survived the summer swoon.

“Respiration is another process that cool-season grasses use to release the energy made during photosynthesis. Respiration is a key process in the growth, maintenance, metabolism, and nutrient uptake.

“A process that is important to understand is photorespiration. During warm weather (especially temperatures > 87 °F) cool-season grasses have trouble capturing carbon dioxide (CO2) from the air and instead capture oxygen (O2) leading to a process called photorespiration. When photorespiration occurs instead of photosynthesis the plant uses energy instead of making energy.

“In short, cool-season grasses don’t make energy well when it is hot out and as a results they don’t grow (roots or shoots) well in hot weather which can lead to a decline in turf quality.”

If your fescue is showing no improvement by early September, it’s time to plan for fall reseeding.

Fescue seed is best planted in mid-September through mid-October….the earlier the better.

See Planting Fescue in an Existing Lawn for details. fescue in its prime