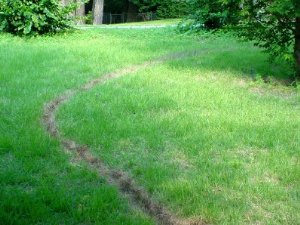 Q: Someone has poured something on my lawn killing it instantly, within 24 hours, turning it blackish in stripes. I called the police and asked if they would test the grass to see what was used. They say they do not do that and suggested I contact you to find out if there is someone that could test a sample. Do you have any suggestions? The killed grass does not smell of anything in particular. I have dealt with weed killer and this is something different.

It does not look like oil or anything. There is no smell other that a horrible dead grass smell. Not slimy. I feel nothing. The grass lifted easily without the roots. I gathered it up and put it into bags as I wanted to try to clean this up.

This happened last week. I know who did it. I suspect my next door neighbor. He moved here in December and has been very peculiar and “crazy” acting in the past few months. I had to call the police last night as he saw that his wife was in my yard talking to me. He was driving home, passed my house, pulled into his driveway with great speed. Flew out of the car and screamed at his wife to stay outside and for his 3 year old to go inside.

I knew something was going to happen. He came into my yard screaming coming towards me. I told him he was trespassing and to get of my property. His wife kept telling him to stop. He left my property and I called the police. I was terrified. Felt like I was in a movie or something unreal. A couple of police cars came and they went to his house and talked with him.

A: Wow…this takes the cake! Since the effect of the chemical was almost immediate…. but you didn’t smell anything, I’m going to rule out solvents …..and guess that it was a strong acid or alkali…maybe muriatic acid. The curve of the damage around the tree says to me that they were walking and pouring…perhaps from a watering can.

The immediate effect is consistent with damage from a corrosive agent. Herbicide damage would take longer and look different. Trying to determine what the damaging stuff is could be a fruitless chase….you’d almost have to know what you’re looking for in order to tell a lab to confirm its presence……and the cost of doing the analysis would be exorbitant. I think you need to document (as you have) every contact with this person. He seems pretty kooky.

“Here are results of my acid/grass experiment:

“The muriatic acid immediately turned the strip of grass brown, and within 3 hours, rather grayish. This morning, it is black. I’ll send photos later today. Incidentally, the acid odor is still evident, and when I touched the blades of grass, caused stinging on my fingers–even after an afternoon/evening rain.”