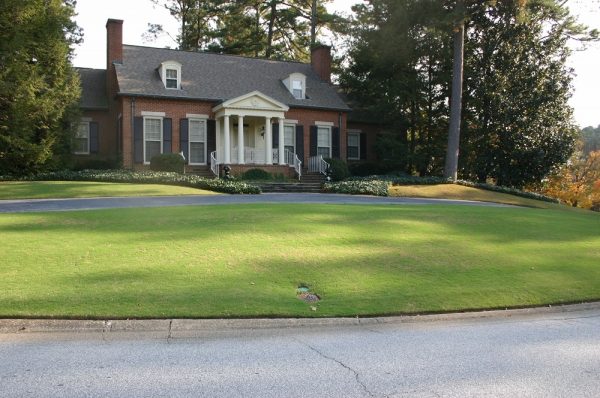 There are usually several varieties of each turfgrass from which to choose. Which is the best for your situation? The information below, taken from a University of Georgia publication, should help.

Cool-season grasses grow well during the cool months (60 degrees-75 degrees F) of the year. They may become dormant or injured during the hot months of summer.

Tall Fescue (Festuca arundinacea). Perhaps the most popular grass in the mountain and upper piedmont areas of Georgia is tall fescue. This is a perennial bunch-type grass that grows rapidly and requires frequent mowing in the spring and fall. Tall fescue needs more water than the warm-season grasses to stay green during the summer. It is quickly established from seed and grows well in full sun as well as moderate shade. Tall fescue will tolerate a wide range of soil conditions, but like most turfgrasses grows best with a soil pH between 5.5 and 6.5. Lawns planted in tall fescue tend to thin out and become “clumpy” thus requiring reseeding every three or more years.

Kentucky-31 (K-31) is the old, common cultivar or variety of tall fescue grown in Georgia. Most of the new cultivars referred to as “turf-type” tall fescues have slightly narrower leaf blades, slower vertical growth rates, greater density and shade tolerance than K-31. As a result, if properly managed, most turf-types will produce a better turf than K-31. More information can be obtained from Cooperative Extension Service Leaflet No. 354, Tall Fescue Lawn Management.

Kentucky Bluegrass (Poa pratensis). Kentucky bluegrass has a medium leaf texture and a bright, pleasing color. There are many varieties which grow well in and north of the upper piedmont areas of Georgia. Kentucky bluegrass can become semi-dormant during hot weather, and grows best in a fertile soil with a pH of 6 to 7. While it does best in partial shade, it will grow in open sun if adequate moisture is present.

Ryegrasses. Perennial ryegrass (Lolium perenne) and annual ryegrass (Lolium multiflorum) are suited for temporary cool-season turfgrasses throughout Georgia. They can be used as a temporary winter cove on new lawns that have not been permanently established. Ryegrasses are also used for overseeding, that is, to provide a green cover on a warm-season grass during the winter. However, overseeding may damage the warm-season grass unless managed correctly in the spring because the ryegrass competes for moisture, sunlight and nutrients.

There are many varieties of perennial ryegrass, and depending upon the environmental conditions, they may behave as an annual or perennial. As its name suggests, annual ryegrass dies as summer approaches. It is also known as common, winter, domestic, Oregon, and Italian ryegrass.

Warm-season grasses grow best during the warm months (80 degrees-95 degrees F) of spring, summer and early fall. They grow vigorously during this time and become brown and dormant in winter.

Bermudagrasses (Cynodon Spp). All bermudas thrive in hot weather but perform poorly in shade. Bermudas spread so rapidly by both above-and-below-ground runners that they are difficult to control around flower beds, walks and borders. If fertilized adequately, they require frequent mowing. The bermudagrasses are adapted to the entire state and tolerate a wide soil pH.

Common Bermudagrass (Cynodon dactylon). Common bermudagrass is drought resistant, grows on many soils, and it makes a good turf if fertilized and mowed right. Common bermudagrass produces many unsightly seedheads, but in spite of this fault, it is frequently used on home lawns due to the ease and economy of establishment. Common bermuda may be planted from either seed or sprigs and with intensive management will provide a high quality turf. However, the newer hybrid bermudas are generally far superior.

All of the improved bermudas described here have been developed and released cooperatively by the University of Georgia Coastal Plain Experiment Station and U.S. Department of Agriculture. They are products of the grass breeding program of Dr. Glenn W. Burton, Principal Geneticist.

Tifway (Tifton 419) Bermudagrass. Tifway has several outstanding features that make it an ideal turf for lawns and golf fairways and tees. It has a dark green color and stiffer leaves than Tifgreen. Tifway is more frost resistant than other bermudagrasses. Therefore, it will usually remain growing and green longer in the fall and will develop color earlier in the spring. This trait, along with its ruggedness, has led to its use on football fields.

Tifway II Bermudagrass is an improved mutant of Tifway. Tifway II looks like Tifway and has the same desirable characteristics, but makes a denser turf, is more frost tolerant, often greens up earlier in the spring and provides slightly better turf quality.

Tifgreen (Tifton 328) Bermudagrass. Tifgreen is a low-growing rapidly spreading grass. It is relatively disease resistant and makes a dense, weed-resistant turf when properly managed. Its fine texture and soft, green leaves are largely responsible for its excellence as a putting green on golf courses.

Tifdwarf Bermudagrass. This hybrid is thought to be a vegetative mutant from the original Tifgreen nursery at Tifton. Tifdwarf, as the name implies, is a very short grass with tiny leaves that hug the ground very closely. It has softer leaves and fewer seedheads than Tifgreen. These characteristics contribute to its use on golf greens and make it less desirable than the other hybrids for lawn use.

Carpetgrass (Axonopus affinis). Carpetgrass is a perennial, coarse-leaved, creeping grass which grows in the central and southern regions of the state. It grows better on low, wet soils than do other grasses. It will grow well in either sun or shade but is less shade tolerant than St. Augustine and centipedegrass which it resembles. Carpetgrass may be planted by seed or sprigs. It is not winter hardy and should not be planted north of middle Georgia.

Carpetgrass is recommended only for lawns on wet, low fertility, acid, (pH 4.5-5.5) sandy soils where ease of establishment and care is more important than quality. Its chief disadvantage is rapid seedhead production.

Centipedegrass (Eremochloa ophiuroides). This is a low, medium textured, slow growing but aggressive grass that can produce a dense, attractive, weed-free turf. It is more shade tolerant than bermudagrass but less shade tolerant than St. Augustine and zoysiagrass. Since centipede produces only surface runners, it is easily controlled around borders of flower beds and walks. It is well adapted as far north as Atlanta and Athens.

Centipede is the ideal grass for the homeowner who wants a fairly attractive lawn that needs little care. Centipede does not require much fertilizer or mowing, and compared to other lawn grasses, is generally resistant to most insects and diseases. It will, however, respond to good management and provide a very attractive turf. Centipede can be established from either seeds or sprigs. Since it is slow growing, it takes longer than bermuda and St. Augustine to completely cover.

Centipede is subject to “decline” problems that can be prevented by proper management. This includes care not to overfertilize, prevention of thatch accumulation, irrigation during drought stress, particularly in the fall, and maintaining a mowing height of 1-1 1/2 inches. Centipede is well adapted to soils of low fertility with a pH of 5.0 to 6.0 but grows best — like most grasses — at a soil pH of 6.0 to 6.5. For additional information see Cooperative Extension Service Leaflets No. 313, Centipede Lawns, and No. 177, Prevent Centipede Decline.

Zoysiagrasses (Zoysia Spp). Several species and/or cultivars of zoysiagrasses are available in Georgia. Most are adapted to the entire state and form an excellent turf when properly established and managed. For the best appearance, most zoysias require cutting with a reel mower, periodic dethatching, and more frequent irrigation than other warm season turfgrasses. The zoysias form a dense, attractive turf in full sun and partial shade, but may thin out in dense shade. Most zoysias grow very slowly when compared to other grasses. They usually are established by sodding, plugging, or sprigging. Two-inch diameter plugs planted on 6-inch centers, will cover completely in 12 months if irrigated and fertilized properly.

Zoysia japonica is sometimes called Japanese or Korean lawngrass or common zoysia. It has a coarse leaf texture and excellent cold tolerance like Bermudas and it can be seeded.

Meyer zoysia, also called “Z-52,” is an improved selection of Zoysia japonica. It has medium leaf texture, good cold tolerance, and spreads more rapidly than the other zoysiagrasses.

This is the zoysia often advertised as the “super” grass in newspapers and magazines. These advertising claims are true in part, but do not tell the entire story.

Emerald zoysia is a hybrid between Zoysia japonica and Zoysia tenuifolia that was developed in Tifton, Georgia. It has a dark green color, a very fine leaf texture, good shade tolerance, high shoot density, and a low growth habit. Emerald will develop excess thatch rather quickly if over fertilized and its cold tolerance makes it more susceptible to winter injury from the Atlanta area and north.

After this grass has been mowed, new growth originates largely from the base of the plant, rather than from the branches, thereby leaving very few exposed brown stems. Emerald zoysia is moderately winter-hardy and fairly shade tolerant, but it grows more slowly when planted in a shady yard. Because of its thick growth, it is difficult to overseed.

El Toro is a relatively new zoysia that was developed in California and looks like Meyer. El Toro is the fastest growing zoysia, tolerates mowing with a rotary mower, and produces less thatch than Meyer, The winter hardiness of this zoysia is not yet well established.

The zoysiagrasses are (1) slow to cover completely, thus more costly to establish; (2) less drought-tolerant than Common bermudagrass; and (3) recommended for lawn use only when the homeowner is willing to provide the required maintenance. For more information see Cooperative Extension Service Leaflet No. 395, Zoysiagrass Lawns.

St. Augustinegrass (Stenotaphrum secundatum). Compared to finer textured grasses like the bermudas, St. Augustine has large flat stems and broad coarse leaves. It has an attractive blue-green color and forms a deep, fairly dense turf. It spreads by long above-ground runners or stolons. While it is aggressive, it is easily controlled around borders. It produces only a few viable seed and is commonly planted by vegetative means.

St. Augustine is the most shade tolerant warm-season grass in Georgia. It is very susceptible to winter injury and should only be planted with caution as far north as Atlanta and Athens. Perhaps the greatest disadvantage of this grass is its sensitivity to the chinch bug. While lawn insecticides can control this insect, frequent applications are required. 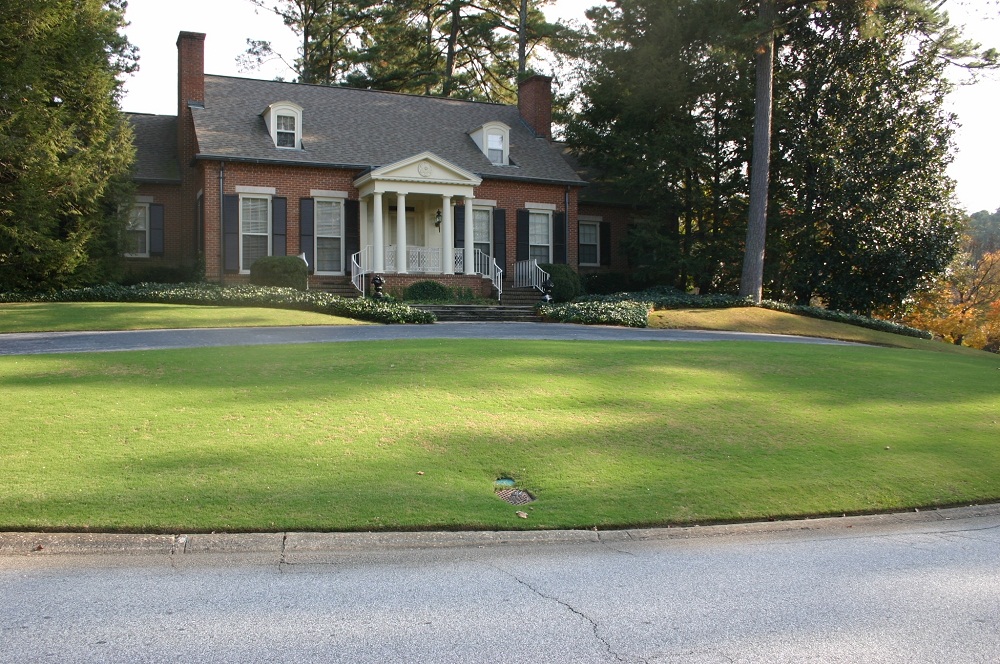