My neighbor and I acted as if we were surrounded by rattlesnakes.

“Ease your foot down there, slowly…slowly. Now take a quick step to the right and hop up onto that cinderblock!”

We were curious about the land clearing that’s been ongoing near our homes so we’d struck out through the woods to investigate. Too late, we found ourselves in the middle of a poison ivy thicket and had to gingerly direct each other to a safe escape path.

We returned home without ill effect but others have not been so lucky. The potency of this itchy and insidious vine was first reported back in the 1600’s. We can only guess at the anguish of the settler who first brushed against a leaf and was rewarded with a week of misery afterwards.

Like the aftermath of a chigger bite, poison ivy itch is helped by amputation……..at least for a little while.

Lest you accidentally come to first-hand knowledge of this pest, let’s identify it alongside other plants which are sometimes judged guilty by association.

POISON IVY The familiar “leaves of three” can occur almost anywhere. Birds eat the ivy seeds each autumn and distribute them far and wide. Poison ivy snakes along the ground until it finds an upright surface to ascend. After several years the vine becomes extremely hairy and branches three feet in length may emerge from it.

The irritating oil, urushiol, is on every part of the plant. Only one billionth of a gram can cause a skin reaction. My brother Alan passed along the fact that 500 people could itch from the amount covering the head of a pin. My neighbor and I were remembering that as we tiptoed through the woods.

VIRGINIA CREEPER This vine’s “leaves of five” and love for the same habitat as poison ivy often cause it to be accused of the same transgressions. Virginia creeper, though, is harmless. Although it is too sparsely leafed to make a good ornament for an arbor, this vine sports attractive crimson leaves in fall.

BOXELDER, BRAMBLES Poison ivy is a vine, boxelder maple is a tree. When a boxelder seedling emerges, though, the leaves look powerfully similar to those of its noxious neighbor. I can usually tell the two apart by the leaf edges. The two side leaflets of poison ivy are typically smooth on the upper edge. Boxelder leaves are ordinarily toothed on both edges.

The reddish coloration of boxelder leaf stems also mimics the purple-red stems of poison ivy. By observing the habit of the plant (tree vs. vine) and the fact that many of the tree leaves have five leaflets rather than three, you’ll be able to tell the two apart.

Wild brambles have three leaves as well but the thorns that accompany the stems immediately inform you that the vine is not poison ivy.

KILLING IT Now that you have the vine identified, what can you do about it? I have had good results with glyphosate (click for sources)

. Both are fast acting and seem to kill the plant for several feet back from the point of spraying. If you find a big poison ivy vine on a tree, carefully clip it with loppers and spray the vine stump with one of the aforementioned chemicals.

Master Gardener Carolyn K. doesn’t use sprays at all! She just puts her arm into a plastic newspaper wrapper and pulls the vines by hand. She then pulls off the plastic and discards it! Poison ivy seeds are spread by birds. The vines will continue to sprout throughout the summer. Constant vigilance is needed to avoid the oh-so-attractive calamine skin makeup.

Steven Stinchcomb, garden artist in Fayetteville, says he has wracked his brain trying to think of a benefit from poison ivy. “I know birds like to eat the seeds”, he admits, “and the fall leaf color is nice. But for the rest of the year, poison ivy is the sorriest, most misbegotten vine I can think of!”

Once upon a time, my son learned to count (“One, two, THREE!) by helping me identify poison ivy leaves in the neighborhood. While there are plants similar in appearance to this infernal supplejack, you can count on a week of woe if you accidentally brush it in your landscape. 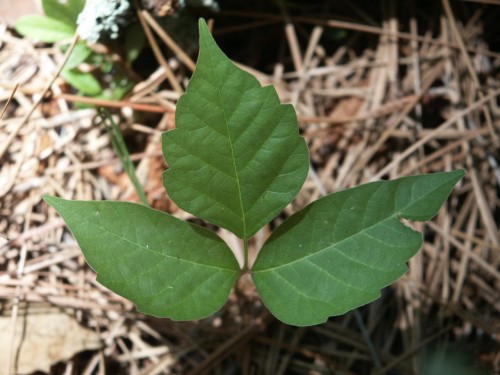 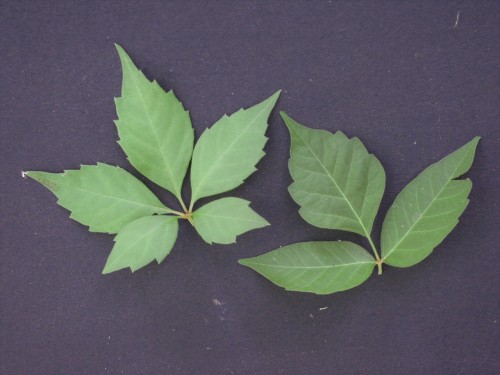 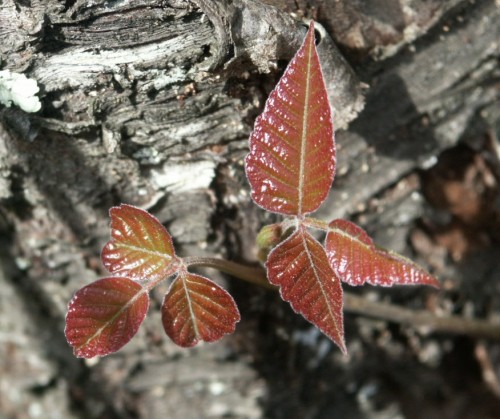 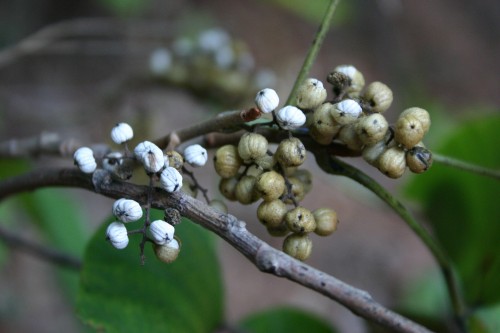