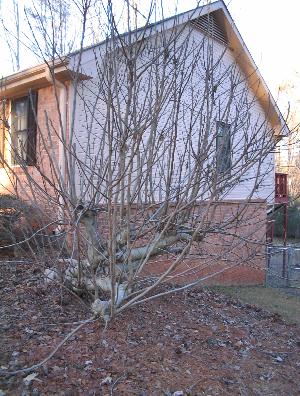 Q: This fig tree belongs to my neighbor, but he is now giving me free reign to care for it. Several years ago there was such a bumper crop that I picked over a bushel of figs. Three years ago my neighbor had a laborer cut back his fig tree. It was drastic, as you can see. Over the last three seasons the tree has grown considerably, reaching its former height, but nearly all the new growth is vertical. There have not been many figs, a handful or two at most. How should I proceed with pruning/shaping/restoring this tree?

A: Fig bushes produce their fruit predominantly on older, horizontal, mature branches. When the majority of the bush was pruned away, the fig responded by making lots of upright juvenile branches. Until they mature for a season or two, little fruit will be produced.

I think I’d just cut off some of the taller upright branches and continue to wait for the horizontal branches to start bearing fruit.